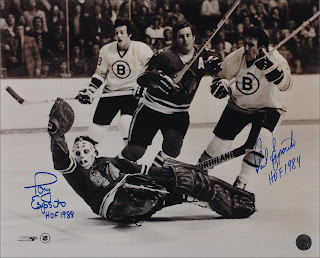 On April 19, 1970, in Game 1 of the Stanley Cup Semi Finals Phil Esposito scored a hat trick for the Boston Bruins in a 6-3 win over the Chicago Blackhawks. Esposito scored all three of the goals against his brother Tony who took home the Vezina Trophy as the best goalie in the league. The Bruins proved to be too tough  for the Blackhawks as they rolled over them with a 4 game sweep. The Bruins knocked off the Rangers 4 games to 2 in the next round, before meeting the St. Louis Blues in the Stanley Cup Finals. The Bruins continued to make history as they swept the Blues and took home the Stanley Cup.

The link provided is a newspaper archive from the day after Phil scored three times on his brother Tony:
http://news.google.com/newspapers?nid=2506&dat=19700420&id=esxJAAAAIBAJ&sjid=5goNAAAAIBAJ&pg=6399,4622933
Posted by Wade Forrester at 8:23 AM