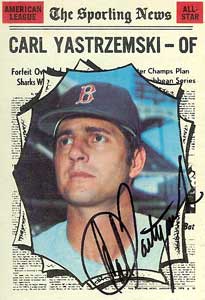 On April 11, 1961, Carl Yastrzemki made his debut for the Boston Red Sox. The pressure was huge for Yaz as he took over in left field, a position Ted Williams had held since 1939. In his first at bat he singled to left off of A's hurler Ray Herbert. Yastrzemki spent the next 23 years with the Red Sox and collected another 3,418 hits on the way to establishing himself as a legend in Boston. The 18 time all star and former triple crown winner was inducted into the Baseball Hall of Fame in 1989.

If you would like to read more about Yaz and his great career check out his bio here: http://sabr.org/bioproj/person/a71e9d7f
Posted by Wade Forrester at 8:23 AM