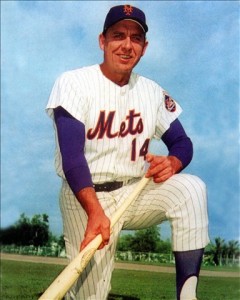 On April 2, 1972, the manager of the Mets, Gil Hodges had a fatal heart attack while he was returning from a golf outing with his coaches. While he was best known for his long playing career with the Dodgers, he had also made a name for himself a as a manager when he managed the Miracle Mets to a World Championship in 1969. The manager was just two days shy of his 48th birthday. The Mets organization was rocked by the passing of their skipper and they named Yogi Berra manager, Berra remained in that position until 1975. The flag flew at half staff at Shea Stadium on Opening Day as the team wore a black armband for the entire '72 season in memory of their late manager.

Hodges playing career was a solid one. He started out as a 19 year old kid trying to make the Brooklyn squad, his hopes to become a major leaguer were put on hold when he was called into service during World War II. When he returned from war he was 23 years old and had a cup of coffee with the club before becoming an everyday player in Brooklyn. Hodges won the World Series twice while he wore Dodger blue, the first ring came in 1955 in Brooklyn then the second ring came in 1959 just one season after the team shifted to Los Angeles. He played with the Dodgers until he was taken by the Mets in the 1962 expansion draft. He only played in 54 games during the '62 season for the Mets as he was hampered by knee injuries but he did hit the first long ball in the history of the franchise. After just 11 games in 1963 the Mets dealt him to the Washington Senators, in Washington he hung up his cleats and became a full time manager.

He managed the Senators until 1967, while the team showed improvement he wasn't able to guide them to a winning record. Even though his team wasn't able to win on the field his impact on his players was profound and probably none more than a relief pitcher by the name of Ryne Duren. With Duren's career coming to a close he had turned to the bottle and alcoholism had taken over his life. One night Duren decided he just didn't want to live any more and was going to commit suicide by jumping off a bridge, his manger Gil Hodges came and talked him off of that bridge, which not only saved his life it might have just been a turning point for the 36 year old player. Durne went onto live a long life, he not only beat his addictions he turned it into a positive and by educating other men and women about the damage that alcohol can do to their lives. While Hodges' days in Washington didn't produce a winning record he definitely helped Duren win a battle. 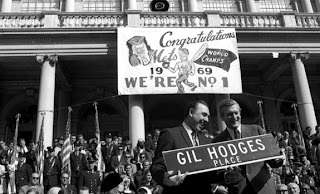 In 1968, Hodges was talked into managing the New York Mets. The team had struggled since their early days in the league and Hodges knew that it was going to take some work to get things turned around. In his first year with the club they posted a 73-89 record, it was the best record the team had posted since they began playing ball. The '69 season was one that Mets fans will never forget as Hodges led the team to  World Championship. Hodges had become a master at using each and every player on his bench and guided his team to a 100 win season before they went on a run for the title. Both the Mets and Orioles swept their way through the League Championship Series before they met in the Fall Classic. The Mets capped off the complete turnaround by beating the O's 4 games to 1 to become World Champs. The job Hodges had done was nothing short of remarkable. The club wasn't able to match the success of the '69 season but they did remain competitive for the next couple of seasons. Then tragedy struck.

With the season on the horizon and hopes of another Championship run in mind, Hodges took a handful of coaches to shoot a round of golf in Orlando, Florida. While the group of men were headed back to the hotel, Hodges collapsed and slammed his head on the sidewalk as he fell.  His bullpen coach Joe Pignatano went to assist the manager and immediately knew that Hodges wasn't going to make it, he said that Hodges passed away right in his arms. It was devastating to all those that knew him, Howard Cosell said "Next to my son's death, this is the worst day of my life" I think that says a lot on how people felt about Gil Hodges. Hodges left behind a wife, a son, and three daughters. 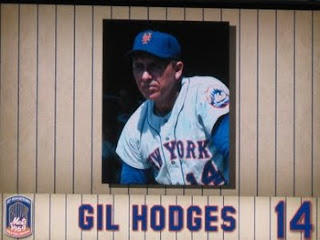 The life and career of Hodges is the reason why I chose to use this fact, even though this day marks the anniversary of his passing it also gave me an opportunity to talk about the man and his accomplishments. Those accomplishments include; 8 All Star appearances, 3 Gold Gloves, and 3 World Championships. There is no doubt that his time on earth was shorter than many would have hoped for but in that time he made his indelible mark on the game he played and managed for so many years. The Mets organization retired Hodges #14 in 1973 and while he has not yet to be elected to the Hall of Fame, I believe that time will come.