April 7, 1979: Ken and Bob Forsch become the only brothers in the history of MLB to both toss a No Hitter 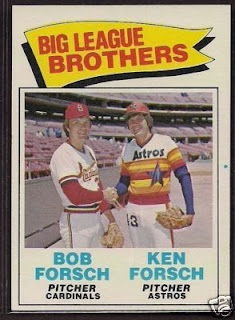 On April 7, 1979, in a 6-0 win, Astros hurler Ken Forsch tossed a no hitter against the Atlanta Braves. Forsch faced just two batters over the minimum on his way to making history. His brother Bob had pitched a no no in the '78 season for the St. Louis Cardinals, which made them the only siblings to both toss a no hitter.

Ken lived in the shadow of his brother a bit, but on this day it was Ken who would shine. After a second inning walk he sat down twenty consecutive batters before walking another batter in the 8th inning. He was absolutely dominant as he completed the sixth no hitter in the history of the Astros franchise. It was something that was well deserved for Bob's older brother, unlike Bob he had bounced between the rotation and the bullpen, while he had limited success in each role he hadn't made a huge name for himself, this game made it so everyone from California to New York knew who he was. He pitched for a number of years following that remarkable performance, he spent time with the Astros and Angels before retiring in 1986.

Bob Forsch threw a second no hitter in 1983, his career was definitely a notch above the career of his older brother. However, what Ken did over the course of his career is to be admired, he was a solid pitcher that would do anything it took to help his team win a ballgame including tossing a no no to start the 1979 season. They were both very accomplished athletes and they will forever be the first set of brothers to both throw a no hitter and to date no two brothers have matched the feat so they might just go down in history as the only brothers to ever do so.
Posted by Wade Forrester at 11:42 AM