On April 5, 1980, future Hall of Famer, Marcel Dionne of the Los Angeles Kings edged out a young phenom from the Edmonton Oilers to win the scoring title. Dionne and Gretzky finished the '79-'80 season tied with 137 points apiece, but Dionne had two more goals so he took home the Art Ross Trophy. It was the only time in his career that he would win the scoring title, however Dionne consistently finished near the top in the points category as well as many others. Marcel played 18 seasons in the National Hockey League, in that time he was a goal scoring machine. He lit the lamp 731 times and recorded a grand total of 1,171 points before he retired in 1989. At the time of his retirement Dionne was the third leading scorer of all time, only Gretzky and Howe had scored more points in their careers. 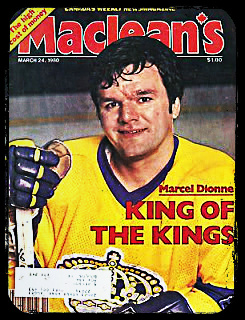 A native of Quebec, Dionne rose through the junior rankings quickly and by 1971 he was drafted 2nd overall by the Detroit Red Wings. Dionne's rookie season was a great one, he scored 77 points, which was a record for a rookie at the time. With speed and the ability to score at a moments notice, Dionne turned into one of the best centers in the league. He finished third in the league in points in the '74-'75 season with 121 and was developing into one of the league's elite players. Unfortunately for the Red Wings organization a contract dispute would lead to a trade to the L.A. Kings in June of 1975. While it was unfortunate for the Red Wings, the Kings would get to watch this kid turn into the franchise's all time leading scorer.

Dionne showed up in L.A. and made an immediate impact as he scored 40 goals in his first season with the team, he followed it up with a 53 goal season. In 1979 he was put on a line with Dave Taylor and Charlie Simmer, it became known as "The Triple Crown" line. Dionne had already made a name for himself but the two guys by his side were far from established. It wouldn't take them long to become superstars right along side of Dionne. The line went onto become one of the best scoring combos in the history of the game. The '80-'81 season was the best as each player topped 100 points on the season. The trio played together until Taylor was traded in October of 1984. 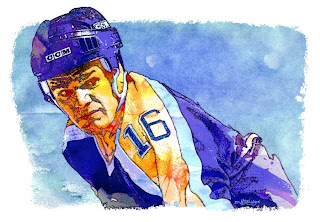 Despite all the regular season success, it didn't translate to the postseason for Dionne and the Kings. After Taylor was traded to Boston Dionne played in L.A. for another full season before being traded to the Rangers at the trade deadline in 1987. The Rangers were headed to the playoffs and he hoped this would be the year he won the Stanley Cup. It just wasn't to be, the Rangers were knocked out in the first round and a championship would continue to elude him. In his only full season in New York, Dionne scored 31 goals but the team wouldn't make the playoffs. He played just 37 games the next season then hung up the skates. Even though he never did win a Cup, he was one of the best players to ever play the game. Dionne is 4th all time with 731 goals and 5th on the all time points list. He was inducted into the Hall of Fame in 1992 and would forever be among the best to ever lace up a pair of skates.

The artwork of Dionne can be found here:
http://browse.deviantart.com/art/Marcel-Dionne-294249040