April 9, 1959: Celtics sweep the Lakers in the NBA Finals 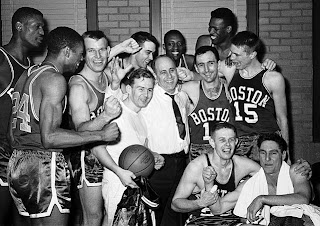 On April 9, 1959, with a 118-113 victory over the Minneapolis Lakers the Boston Celtics completed the first ever sweep in the NBA Finals. It was the first of eight consecutive Championships for the Celtics as they put together one of the most dominant stretches in the history of the sports.

It was the second title for the Celtics in the last three seasons, they had won it in 1957 then made a trip to the Finals in '58, only to be beaten by the St. Louis Hawks. They came back in '59 with a vengeance and marched through the regular season and finished with a league best 52-20 record. The team was unstoppable as they rolled into the postseason. The Lakers on the other hand were led by Elgin Baylor, Baylor was an absolutely great player who averaged 24.9 on the year, the team finished with a 33-39 record which was the second best in the West behind the defending champion St. Louis Hawks. The Hawks posted an almost equally impressive record as the Celtics as they went 49-23, once the playoffs started records were out the window and Minneapolis made a run. After knocking out the Detroit Pistons in the first round the Lakers stunned the basketball community by beating the defending champs in 6 games which sent them to the Finals. After the Syracuse Nationals beat the New York Knicks in the first round they were set to meet the best team in the league. The Nationals didn't go down without a fight as the series went to 7 games before Boston prevailed.

This was the first time a losing team made it to the Finals, the only other team to did it in 1981 when the Houston Rockets made it with a 40-42 record. The Rockets much like the Lakers had their run end at the hand of the Celtics, it would take 6 games to decide that series. The 1959 Championship series was the beginning of the rivalry that still stands strong today. They have met head to head in the Finals 12 times. Boston took home the title the first 8 times, it all started with this game in 1959. The Lakers shifted to L.A. following that season and developed into one of the best teams in the west. They still couldn't get passed the Celtics as the team from Boston dominated an entire decade, they won the title every year from '59-'66, after failing to make it passed the second round in 1967 they bounced back to win it in '68 and '69. 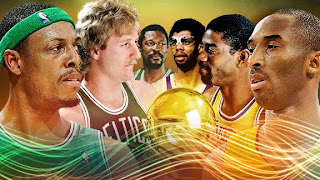 The dynasty truly started in 1957 when they won their first title, the team was led by coach Red Auerbach and he put together one of the greatest lineups ever. The 1959 Championship squad alone had 5 future Hall of Famers. The team was a true powerhouse, after the championship in 1969 Bill Russell surprised everyone by retiring, which led to the end of that era. The rivalry would lye dormant for a while before Magic and Bird brought it back in the 80's, they had a rivalry that dated back to college and it would help renew the long standing rivalry between the franchises. The two teams met for the first time in the Finals in 1984, it had been 15 years since the Celtics beat them in 7 games, the same fate was in store for this Lakers squad after being disappointed once again. The Lakers finally beat the Celtics in 1985 then again in 1987. The rivalry took on a different look in more recent years as different stars like Kobe Bryant and Kevin Garnett have come along and while it isn't quite the same as those days the rivalry will always continue the Celtics were able to beat the Lakers in 2008 before the Lakers took it from them in 2010. It was the last times these two teams have met in the Finals, hopefully they have a few more in store.