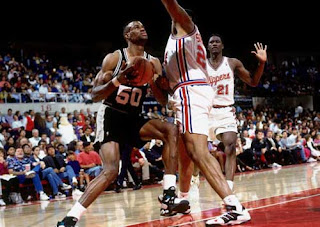 On April 24, 1994, San Antonio Spurs star David Robinson scored 71 points as in the regular season finale in Los Angeles. The 71 points didn't only lead Robinson's squad to a 112-97 win, it also led Robinson to a scoring title as he just edged out Orlando's Shaquille O'Neal for the title. Robinson scored 63 percent from the floor making 26-of-41 including a three pointer and 18-of-25 free throws. The Clippers double teamed Robinson all night long, but some days the great players can't be stopped. Only 4 players other than Robinson have scored 70 points or more in a game and only one player has done it more than once, the one only Wilt Chamberlain crossed the threshold an astounding 6 times.

Here is a list of players who scored 60 points or more in a game: http://www.nbauniverse.com/records/60_or_more_points.htm
Posted by Wade Forrester at 8:53 AM