April 28,1980, The Big O is enshrined into the Naismith Basketball Hall of Fame 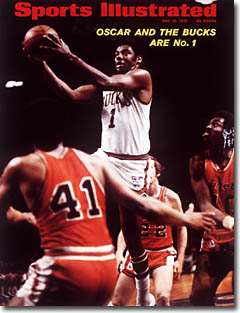 On April 28, 1980, The Big O, Oscar Robertson was enshrined into the Naismith Basketball Hall of Fame. After a stellar career at the University of Cincinnati, Robertson was drafted by the Cincinnati Royals in 1960. He quickly made his mark at the professional level. In his first season in the league he would take home rookie of  year honors after averaging 30.5 points, 10.1 rebounds, and 9.7 assists per game. The next season he became the only player in NBA history to average a triple double for the entire season, with 30.8 points,12.5 rebounds, and 11.4 assists per game. He simply could do it all. Despite his success on the court the Royals failed to win a championship and after 10 years with the team, he was traded to the Milwaukee Bucks. In Milwaukee, he found himself paired up with Lew Alcindor who would later become known as the one and only Kareem Abdul-Jabbar. They formed one of the most dynamic duos in the history of the league as they led the Bucks to a championship title in 1971. Two more division titles followed the championship and the Bucks made another appearance in the Finals in what would be Robertson's last year in the league in 1974. After the Bucks lost to the Celtics in 7 games, it was the end of the line for his career on the court. The 12 time all star scored more than 26,710 points, picked up 9,887 assists, and had 7,804 rebounds under his belt by the time he retired. Robertson's impact on the game went well beyond the hardwood. He was essentially basketball's version of Curt Flood, as head of the players association Robertson led the charge in an anti trust lawsuit against the league. The lawsuit led to landmark changes in free agency and higher salaries for players all across the league.

Check out Robertson's career stats here: http://www.basketball-reference.com/players/r/roberos01.html
Posted by Wade Forrester at 9:27 AM