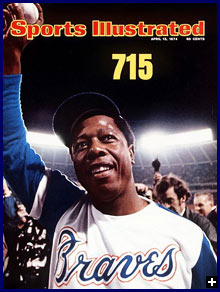 On April 8, 1974, with more than 53,000 in attendance at Fulton County Stadium in Atlanta, Braves outfielder Hank Aaron knocked his 715th home run of career, breaking  Babe Ruth's record of 714 that had stood since 1935. The historic long ball came off of Dodgers starter Al Downing, it was a two run shot that launched over the wall in left field into the Braves bullpen during the fourth inning of the their home opener. As Aaron rounded the bases two fans joined him on the trip, then he was mobbed by his teammates before embracing his family. Aaron had been a model of consistency for close to twenty years which led him to this historic day. The Braves went onto win the game by the score of 7-4.

Aaron broke into the majors in 1954, while the Braves were still in Milwaukee. In his rookie season he showed that he could play with the big boys as he hit .280 and cranked out 13 homers. In his second year in the league he knocked 27 out of the park and brought his average up to .314, this was just the beginning of one of the best stretches of baseball any player had ever seen. His only World Series ring was won in 1957 as he led the team to the World Series after batting .322  in the regular season, he showed up in the Fall Classic and hit .393 with three homers and 7 ribbies. 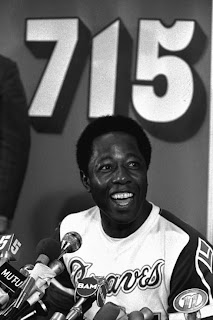 The year after they won the series he brought his average up to .326, then in 1959 he hit a league leading .355. He continued to hammer the ball and his numbers continued to blow people away. The team moved to Atalanta in 1966, it was the end of an era in Milwaukee, but the beginning of an era in Atlanta. His first two years in Atlanta he led the league in home runs and the fans knew they were getting to watch one of the greatest to ever swing a bat. He hit 315 home runs in Atlanta before he he cracked his historic 715th at the home opener in 1974. He would hit 19 more that season it would be the last season he wore a Braves uniform.

Aaron was traded to the Milwaukee Brewers right after the '74 season ended, he was headed back to the city where it all started. It was the twilight of his career, he played two seasons with the Brewers then retired as the all time home run leader. He had hit another 40 home runs since that day he surpassed the Babe, which brought his total to 755. In 2007 Barry Bonds surpassed Aaron on the all time home run list, however many people still consider Aaron the true champion since Bonds has been implicated in steroid use. No matter how you lean on that topic the career of Hank Aaron was one of the greatest careers in the history of baseball. He is the only player in the history of the game to hit 30 homers 15 or more times and also holds the all time rbi record and the all time total bases record. Hank was enshrined into Cooperstown in 1982.

Here is a great video about his historic home run: http://www.youtube.com/watch?v=8S6KPtpGn9E