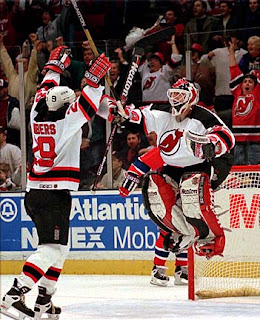 On April 17, 1997, New Jersey Devils netminder Martin Brodeur became just the second goalie in NHL history to light the lamp in a playoff game. With the Candiens down by 2 late in the game they pulled Jocelyn Thibault hoping for a miracle. It was a miracle that would never happen as the puck ended up on the stick of Brodeur who shot it the length of the ice and straight into the empty net. Brodeur's goal sealed the deal on a 5-2 win for New Jersey. Ron Hextall scored a playoff goal for the Philadelphia Flyers in 1989 making him the first goalie to accomplish the feat in a playoff game.

Here is footage from Brodeur's playoff goal: http://www.youtube.com/watch?v=QIuBGMohoUE
Posted by Wade Forrester at 8:04 AM