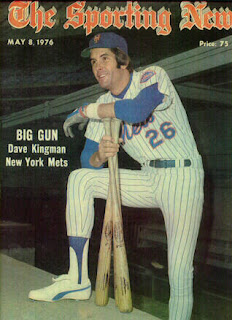 On April 14, 1976, with a 20 mile per hour wind at his back Dave Kingman from the New York Mets crushed one of the longest home run in the history of Wrigley Field. It happened in the sixth inning of the contest with the Mets up 3-2 over the Cubbies. Kingman stepped to the plate with a guy on and two outs, after a brief discussion with his manager Cubs reliever Tom Dettore worked the count to 1 ball and 1 strike before he sent a fastball down the pipe and Kingman crushed it. The ball sailed across Waveland avenue and bounced off a building, for many years a red X marked the spot closest to where the ball hit. Some estimated it at 630 however more conservative estimates have it around 530 feet, either way it was a moon shot that nearly went into orbit. While some argue that some other home runs at Wrigley were longer, many believe this to be the longest in the history of the park. Even with Kingman's blast the Mets couldn't hold onto the win as the Cubs took the game by the score of 6-5.

If you would like to check out a great rundown of the history of the long ball at Wrigley check this out:
http://research.sabr.org/journals/wrigley-field-homers
Posted by Wade Forrester at 10:56 AM