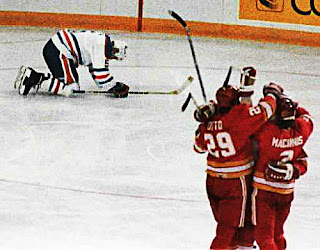 On April 30, 1986, Edmonton Oilers defenseman Steve Smith inadvertently knocked the puck it his own net just 5 minutes and 14 seconds into the third period of Game 7 of the Smythe Division Finals. The goal gave the Calgary Flames a 3-2 lead that proved to be the game winner. As soon as Smith realized his error he went to the ice in pure disbelief. Flames forward Perry Berezan was credited with the goal but everyone knew it was just an errant pass by Smith that sent the Flames to the next round. Smith wept as he shook hands with the Flames players after the game, it was a heartbreaker that he would never forget and it happened on his birthday. After beating the St. Louis Blues in the next round the Flames advanced to the Stanley Cup Finals where they lost the the Montreal Canadiens. One year later the Oilers won The Cup and the first person Wayne Gretzky handed the trophy to was his friend and teammate Steve Smith.

Here is an article from 2011 in which Smith recalls the goal: http://www.edmontonsun.com/2011/04/29/exoilers-steve-smith-recalls-fateful-own-goal

Watch the goal here: http://www.youtube.com/watch?v=4D6oWkhJzIk
Posted by Wade Forrester at 7:55 AM