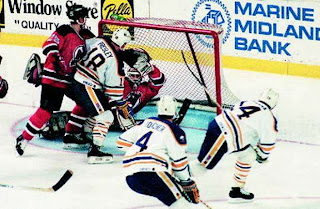 On April 27, 1994, the Buffalo Sabres and New Jersey Devils would take four overtimes to decide who would win Game 6 of a first round playoff matchup. The Sabres came into the game facing elimination and their goalie Dominik Hasek would stand on his head to make sure his team would live to play another day.  Hasek made 70 saves before his teammate Dave Hannan got one passed Martin Brodeur to force a Game 7. The 15,000 plus at The Aud in Buffalo witnessed an instant classic that lasted more than 6 hours before Hannan sent them home happy. The joy was short lived as the Sabres lost 2-1 in the final game of the series just two days later.

Here is an article that was published in the New York Times the day after the quadruple overtime thriller:
http://www.nytimes.com/1994/04/28/sports/hockey-whew-sabres-win-classic-duel-of-defenses-to-tie-devils.html
Posted by Wade Forrester at 8:39 AM