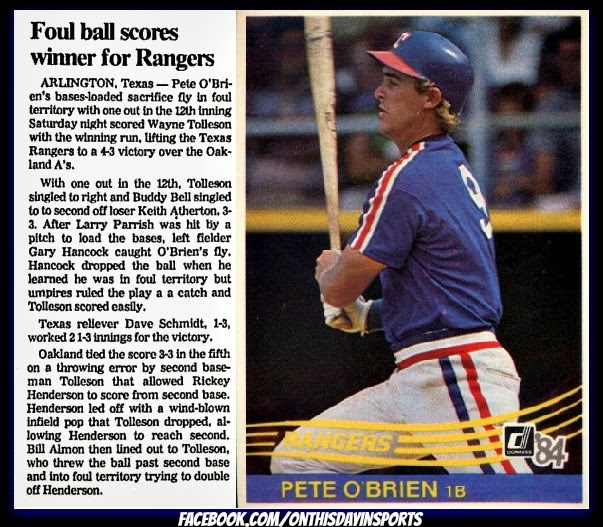 On June 9, 1984, the Rangers found victory in an unusual way before a home crowd of 17,189 in Arlington. With the game tied 3-3 in the twelfth, and the bases loaded, A's outfielder Gary Hancock dropped a Pete O'Brien foul ball laced down the left field line. The umpires ruled the ball a catch, and Wayne Tolleson took advantage of the miscue by dashing home. Some accounts said that Hancock got caught up in making his exchange, to throw the runner out, while others say that he realized he was in foul territory, and in a last ditch effort to not allow a sacrifice fly, he was going to let it hit the ground in foul territory. If that was the case he could not hit the brakes fast enough, as the ball came up on him in a hurry. Either way, it was a great day for those fans in Texas. The game winning RBI by O'Brien might have been the most unusual of his 12 year career, in which he amassed 736 total.

Check out the box score here: http://www.baseball-reference.com/boxes/TEX/TEX198406090.shtml
Posted by Wade Forrester at 12:10 AM