June 22, 1962: Stan The Man Passes The Georgia Peach On The All Time Total Bases List 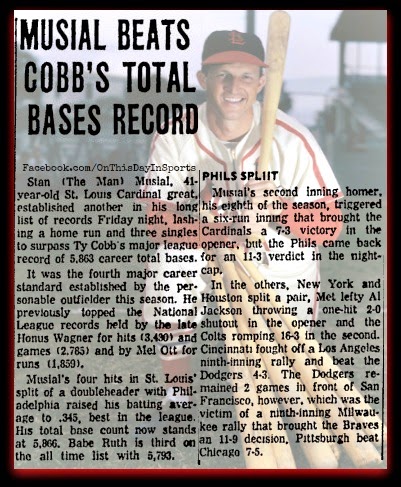 On June 22, 1962, Stan "The Man" Musial became baseball's all time total bases leader when he surpassed Ty Cobb on the list by picking up four hits, which led to seven total bases, during a doubleheader against the Phillies at Connie Mack Stadium in Philadelphia. Cobb's benchmark had been set 5,863, and Musial tied him in the second inning of the first contest, as he led off the frame with a home run, then later in the inning as the Cardinals batted around he picked up a single to surpass the mark. That second inning turned out to be a six run outburst  for the Cardinals who would go onto win 7-3. The outcome was very different in the second contest, as the Phillies found revenge to the tune of an 11-3 victory over the visitors, but not before Musial added another base to his totals. Musial would go onto amass 6,134 total bases in his career, which came to a close the following season. Musial's total bases record ranks second on the all time list today. Only Hank Aaron can boast more as he touched 6,856 bases during his storied career.

It should be noted that very reputable websites such as Baseballreference.com and MLB.com have different totals for Cobb's total bases mark. I am looking at the newspapers that came in the days that followed these events, and some official staticians might have changed some of Cobb's career numbers since.

Here is the list from Baseballreference: http://www.baseball-reference.com/leaders/TB_career.shtml
Posted by Wade Forrester at 1:50 AM