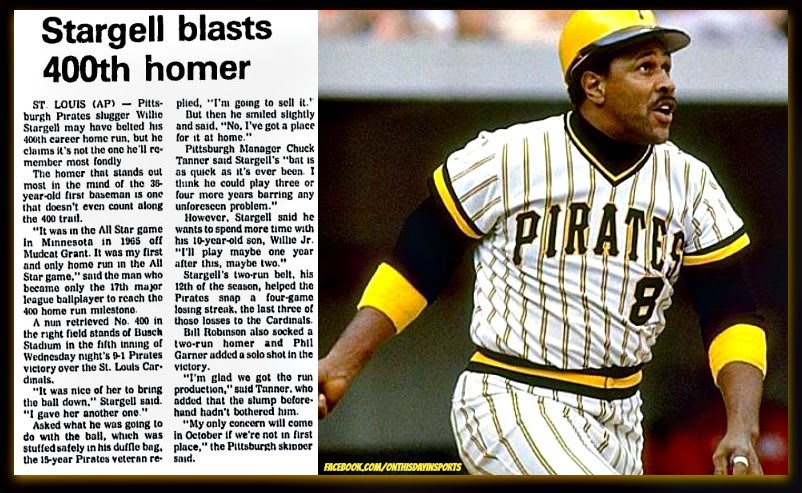 On June 29, 1977, Pittsburgh Pirates legend Willie Stargell hit the 400th home run of his storied career during the third inning of a 9-1 rout of the Cardinals in St. Louis. The man who had become known as "Pops" would finish his career with 475 big blasts in his 21-year-career. The milestone shot came off of St. Louis' starter Eric Rasmussen who ended up being the eventual loser in the tilt. Stargell's first home run came on May 8, 1963 at Wrigley Field in Chicago, and Lindy McDaniel was his first victim.

Over the next two decades Stargell was selected to seven All Star games, led the league in home runs twice, while helping the Pirates win two World Series titles. Stargell's first run at World Series glory came in his prime in 1971. He was 31-years-old at the time, and had led the NL with 48 home runs during the regular season. While the Pirates came out on top in the classic seven game battle against Baltimore, Stargell had hit .208 and had a complete power outage during the series. It took him eight years to reach the Fall Classic for a second time, and the story was much different, as he had put together an MVP campaign at the age of 39, then won the NLCS MVP, and the World Series MVP awards as he led the Pirates to the Championship Title in another seven game battle against the Orioles.

Pops played parts of three more seasons following that last run to glory, before Father Time knocked at his door in 1982. His last big blast on July 21, 1982, proved to be a game winner in Cincinnati. The solo shot off of Reds hurler Tom Hume in the eighth gave the Pirates a 3-2 edge that the hometown squad could not overcome. Stargell's last plate appearance would come in early October as his season and career came to a close. Stargell joined the ranks of baseball's immortals in 1988.

You can check out Stargell's home run log here: http://www.baseball-reference.com/players/event_hr.cgi?id=stargwi01&t=b
Posted by Wade Forrester at 1:58 AM