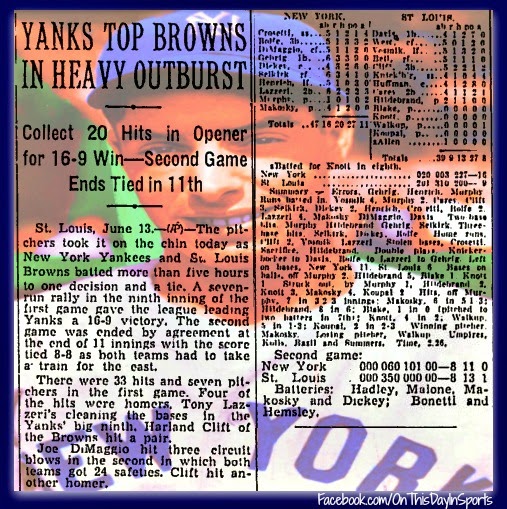 On June 13, 1937, tied 9-9 in the top of the ninth at Sportsman's Park in St. Louis, New York Yankees second baseman Tony Lazzeri sparked a huge rally with a three run shot that put his club up 11-9. Before the inning was over the Yankees had scored seven runs and would end up taking the first game of  a doubleheader against the Browns 16-9. The papers of the day called the Yankees pitching staff taxed due to injuries, which led to the men who could get the job done to being overworked.

The pitching woes continued for the club in the second game of the doubleheader as three different pitchers gave up eight runs. On the other side of the diamond, the Browns skipper Rogers Hornsby let his starter Julio Bonetti go the distance for his Browns. Bonetti gave up eight runs of his own through nine, with a six run fifth being the one that haunted him most. Three of the eleven hits given up by Bonetti came of the bat of Joe DiMaggio, and each of the hits for The Yankee Clipper were of the home run variety, making it the first three home run game of his career. Bonetti nearly escaped with a win, but watched the his opponents tie it in the ninth, before the game was called in the eleventh due to both teams having to hop a train, as the Browns were headed to Philly, while the Yankees had a long homestand in front of them. Like good clubs do, the Yankees worked their way through the injuries that haunted their pitching staff, and figured out ways to win ballgames, as they made a run at the 1937 World Series title.