June 10, 1944: Joe Nuxhall Becomes The Youngest Player To Play Major League Baseball as His Reds Fall To The Cardinals 18-0 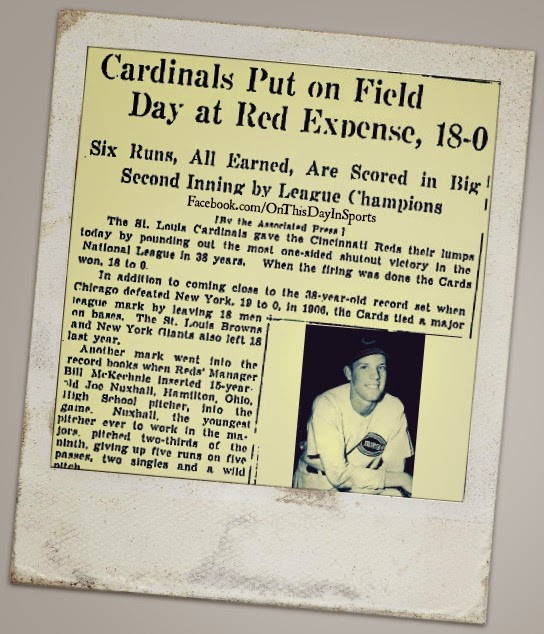 On June 10, 1944, after only scoring one run in their last 25 innings, the St. Louis Cardinals offense came alive by blowing out the Reds 18-0 at Crosley Field in Cincinnati, The 18 runs came off of 21 hits and `14 walks. Stan "The Man" Musial led the way with a 3 for 4 performance that included three ribbies. Although, every single batter who came to the plate wearing a Cardinals uniform, including the pitcher Mort Cooper picked up at least one base knock in the contest. Cooper scattered five hits, as he kept the Redlegs off the board. The 18-0 victory fell one run run short of tying a National League record for most lopsided shutout, which belonged to the Chicago Cubs who beat the New York Giants on June 7, 1906. The Pirates took sole possession of the most lopsided shutout of all time for the entire league with a 22-0 blowout of the Cubs in 1975. The  2004 Cleveland Indians tied that mark with a 22-0 shutout of the New York Yankees.

The game also marked another very significant moment in baseball's past, as Cincy's manager Bill McKechnie called on a young lefty by the name of Joe Nuxhall to pitch in the ninth. Nuxhall was just 15-years-old at the time, making him the youngest player to ever play in a major league contest. Nuxhall came into the game with the score 13-0, and proceeded to give up five runs, on five passes, two singles, and a wild pitch. The youngster came to Spring Training in 1945, but chose to temporarily retire while he completed high school. After he had his diploma in hand, Nuxhall went about making it to the major leagues in a more traditional fashion, as he worked his way through the minor leagues, before returning to the Reds as a 23-year-old rookie in 1952. Over the next 15 years Nuxhall appeared in two All Star games, and posted a 135-117 record, with 130 of those wins coming in a Reds uniform. Nuxhall's last appearance as a player came in in October of 1966. For the next 40 years, Nuxhall called games for the club that sent him trotting to the mound as a 15 year old kid in 1944.