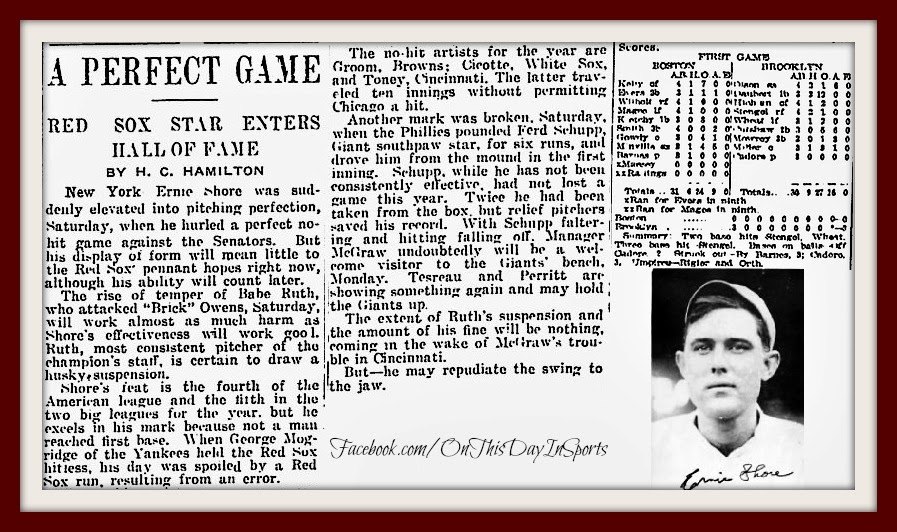 On June 23, 1917, 26-year-old righty Ernie Shore turned in a perfect game* as he led the way in a 4-0 Red Sox win over the Washington Senators in Boston. The asterisk that goes along with this fact is because Shore faced just 26 men, as he relieved an ejected Babe Ruth who walked a man, then hit the umpire, before being sent to the showers. After the man on first was gunned down trying to steal second, Shore set each and every man that followed down in succession without the benefit of a walk, a hit batsman, or a hit. In the days that followed some credited Shore with the perfecto, while others argued that he only faced 26 men, therefore it could stand as a true perfecto. As time has marched, the game has been debated amongst historians, and while many think that Shore should be given credit for the perfect game it has been officially put in the record books as a combined no-hitter.

While Ruth will forever be known as the power slugger that put more than 700 home runs in the seats, he was also a pitcher that won 94 games from the mound during his Hall of Fame career. In the 1917 season alone, Ruth won a career high 24 games, but he got himself scratched from the lineup card quickly on that day in Boston. Ernie Shore's road to the history book began with Ruth  throwing three consecutive balls. Ruth showed disgust each time the ump called a ball, and after the third ball was called he yelled at the umpire "If you call the next one a ball I'm going to punch you in the nose." He wasn't kidding. Owens called a ball that sent Washington's second baseman Ray Morgan trotting to first, and there came Ruth who delivered a healthy shot to the umpires head. Some articles said it hit him in the ear, others said it was in his jaw. Either way it goes, Ruth along with his catcher Pinch Thomas were ejected, and Shore had to come into pitch. Little did he know that his pitching performance would be talked about for decades to come.

Ruth faced harsh penalties over his actions. Some articles said it was a $500 fine and ten games, while others said the fine was a $1,000. Whatever the fine ended up being, it was well worth it, as Ruth's actions led to a history being made as Ernie Shore tossed a perfect game*

This was a tough "fact" to substantiate all around, as the story seemed to have changed through the years. I looked through papers from the day after, which is featured in the picture above, and I looked at papers that were printed in every decade that followed.This piece by Sports Illustrated  has just about the best game account I could find, although, it does say that many feel that Shore deserves the credit since he retired 27 in a row. He only faced 26 men. My personal opinion would be that he does deserve the credit for perfection, but an asterisk is a necessary reminder that it was far from conventional.
http://sportsillustrated.cnn.com/vault/article/magazine/MAG1073981/1/

Check out the box score here: http://www.baseball-reference.com/boxes/BOS/BOS191706231.shtml
.
Posted by Wade Forrester at 2:08 AM