June 2, 1949: The Phillies Blast Five Homers In One Inning 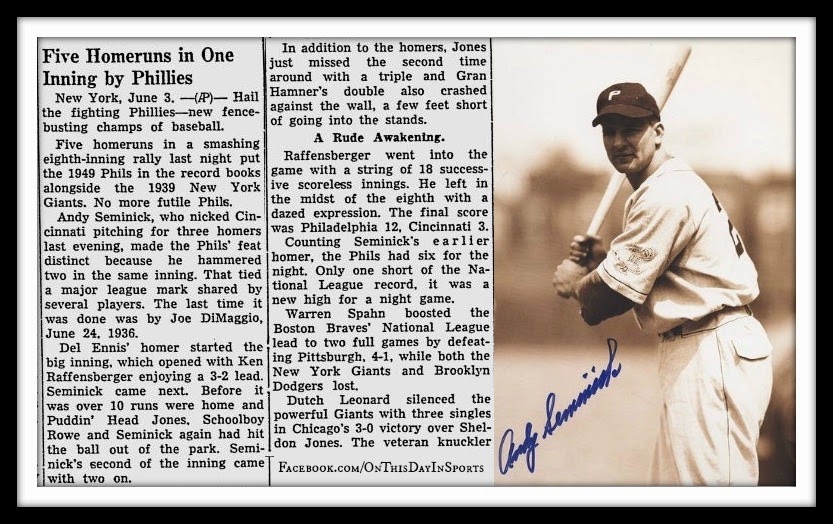 On June 2, 1949, the Philadelphia Phillies matched a major league record by blasting five home runs in a single inning during a 12-3 win over the Cincinnati Reds at Shibe Park in Philadelphia. The big inning came in the eighth, as Philadelphia's catcher Andy Seminick led the way by blasting two of the five long balls, while Del Ennis, Puddin Head Jones, and even their pitcher Schoolboy Rowe got in on the action by going yard. Seminick's day at the plate was memorable to say the least. Not only had he parked two in the seats during the historic eighth inning, he had also knocked one out of the park in the second, making the game his only three home run contest of his career.

The five home runs in a single inning had only been done one other time before that day, which came on June 6, 1939 when the New York Giants belted five in one frame in a contest against Reds. The relocated San Francisco Giants victimized the Reds once again in 1961 by hitting five blasts in one inning. The only time it has happened in the American League came in 1966, when the Minnesota Twins connected on five in one inning during a game against the Kansas City Royals. It took nearly 40 years for a team to accomplish the feat again, which came in 2006 when the Milwaukee Brewers did it in a game against... Guess who... the Reds. Pretty crazy that they happened to be the club who were on the wrong side of history during each of the National League games that the rare feat was accomplished.

Andy Seminick, is an interesting figure from baseball's past. He enjoyed one of his best seasons in  the big leagues in 1949 by connecting on 24 home runs, which was a total he would match the following season. While Seminick's name is not on a plaque in Cooperstown, he was a ballplayer who refused to give up on his dream of playing in the big leagues, and because of that he put together a 15 year career at the Major League level.

If you would like to learn more about him give this a read: http://sabr.org/bioproj/person/b5577958

Check out the box score here: http://www.baseball-reference.com/boxes/PHI/PHI194906020.shtml
Posted by Wade Forrester at 12:03 AM