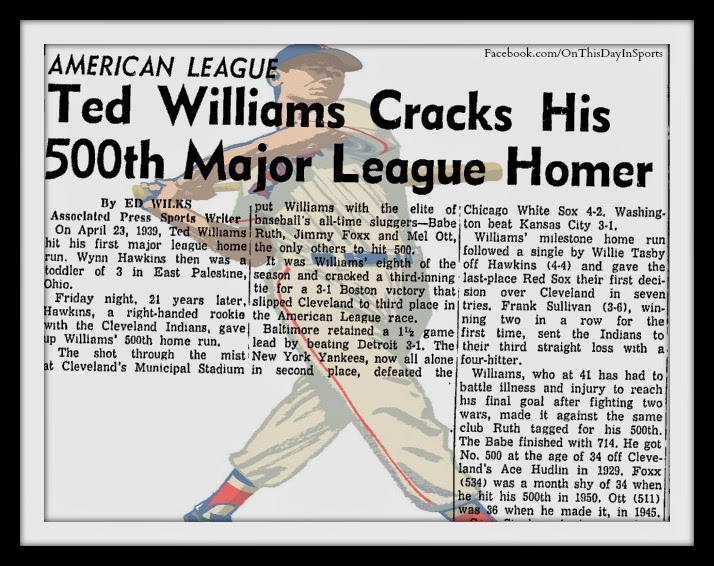 On June 17, 1960, Boston Red Sox legend, Ted Williams blasted the 500th home run of his storied career, during a 3-1 win over the Indians in Cleveland. The milestone shot that proved to be a game winner, came against Wynn Hawkins during the third inning of the contest, with Willie Tasby on first. Frank Sullivan took the mound for the Sox that day and he turned in one of the best performances of his season by striking out 12 men as he went the distance. Sullivan's lone run surrendered came in the first as John Romano knocked Marty Keough in from second with a two out single. Sullivan only allowed three more hits the rest of the day, which would be key in preserving the win on Williams' historic day.

Williams first big league home run came more than 20 years before that historic day in Cleveland. He was a 20-year-old kid at the time. He took 13 at-bats before the first one came on April 23, 1939. It as a first inning two run shot off of Philadelphia A's hurler Bud Thomas during the first inning of what turned out to be a 12-8 win at Fenway. With the first one included Williams would hit 521 home runs total, and his last came during his last major league at bat on September 28th of that 1960 season. It was an eighth inning solo shot at Fenway off of Baltimore Orioles hurler Jack Fisher that pulled his Red Sox within one of the visitors. The following inning Williams would celebrate a win as his teammates put together a late rally that led to a 5-4 victory.

Check out the box score here: http://www.baseball-reference.com/boxes/CLE/CLE196006170.shtml
Posted by Wade Forrester at 2:05 AM