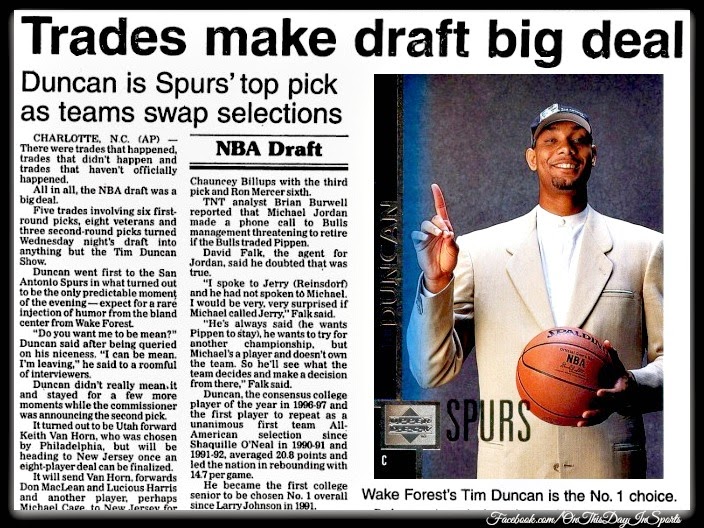 On June 25, 1997, the San Antonio Spurs selected Tim Duncan out of Wake Forest #1 overall in the NBA Draft. Duncan was the only player in the draft that the talking heads considered to be a sure fire pick, and for the most part they were right. Besides Duncan, only Chauncey Billups, and Tracy McGrady proved to be All Star material. The Spurs walked away with the rights to the number one pick due to the draft lottery that had the Boston Celtics as the prohibitive favorites. The moment it was announced that the Spurs had won that lottery there was no question as to who they would pick. Tim Duncan was their man. It would be the first step in what has become a modern day dynasty. Two years to the day of the pick being made Duncan led the Spurs to an NBA title with an MVP performance against the Knicks. It was his first of five titles, with his last coming just this year. With the recent announcement that he will return to the Spurs lineup next season the Tim Duncan era continues in San Antonio.

You can look over his career numbers here: http://www.basketball-reference.com/players/d/duncati01.html