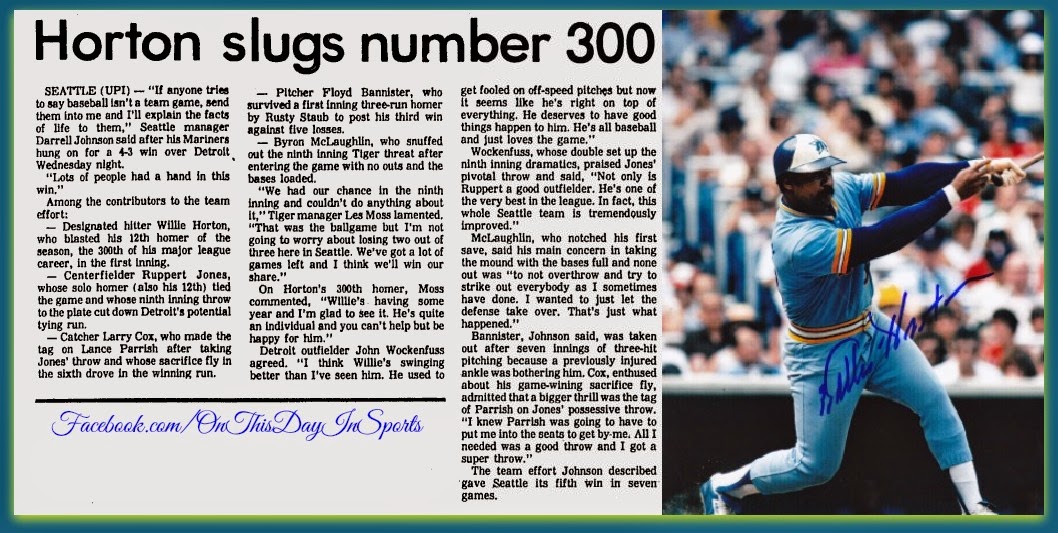 On June 6, 1979, Mariners DH Willie Horton belted the 300th longball of his career. The two run shot off of Jack Morris, proved to be crucial in the 4-3 victory over the Detroit Tigers at the Kingdome in Seattle. A September callup, Horton's journey in the big leagues began with the Tigers organization in 1963. His first long ball came that same year on September 14th.

Over the next 15 years Horton would park a total of 262 balls in the seats while wearing a the uniform of the Detroit Tigers. He also represented the Tigers four times in the All Star game, and was a part of the Championship club of 1968. Horton's playing days in the Motor City came to an end in 1977. He was traded to the Texas Rangers after appearing in just one game for the Tigers. Horton spent one season in Texas, which included the second three home run game of his career.

The 1978 season was a rough one for the veteran ballplayer. The Rangers shipped him to the Cleveland Indians before the season began, and after just 50 games with the Tribe he was released. 10 days after his release the Oakland A's came knocking, and he would be playing ball once again. Although, he would need to keep his bag packed, as the A's sent him to Toronto via trade a little over a month later.

While some might have thought Horton's days in the game as a top talent were over, he landed with the Mariners in '79, and put together a solid year that included a .279 average, 29 homers, and 106 RBI. That '79 season was capped off with the 36-year-old Horton being named the AL Comeback Player of The Year. After one more season in Seattle, Horton's playing days came to an end. His career spanned over 18 seasons, and during that time he blasted 325 home runs past the fences, hit .273, and knocked in 1,163 runs. The overall career numbers might not have been enough for him to find a spot in Cooperstown, but his accomplishments in a Tigers uniform will never be forgotten. 14 of those 18 seasons came with that uniform on The Tigers organization retired his number 23 in 2000. He was only the sixth man to have his number retired by the organization, which includes the likes of Ty Cobb and Al Kaline.

Check out the box score here:
If you would like to learn more about the life and career of Willie Horton check this out:
http://sabr.org/bioproj/person/e320ca42
Posted by Wade Forrester at 1:10 AM