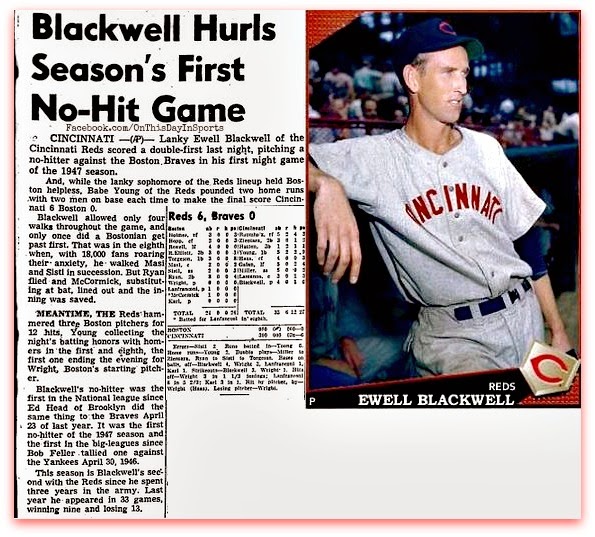 On June 18, 1947, in front of more than 18,000 fans, at Crosley Field in Cincinnati, Reds hurler Ewell Blackwell no-hit the Boston Braves. The 24-year-old righty walked four men, and struck out three as he cemented himself into the history books. Blackwell had run support right out the gate, as he watched his first baseman Babe Young blast a three run bomb in the bottom of the first. Young blasted another three run shot on the eighth, and was responsible for all of the runs that the Reds put on the scoreboard during the 6-0 history maker. Blackwell was just the ninth player to accomplish the feat in Reds uniform, and he nearly became the second man in a Reds uniform to throw consecutive no-hitters. Four days after he faced the Braves, Blackwell came within one out of no-hitting the Dodgers in Cincy. Eddie Stanky broke up the masterpiece, and two batters later Jackie Robinson  laced a single to right before he worked himself out of the jam, and settled for the two-hitter. Blackwell's teammate Johnny Vander Meer had thrown consecutive no-nos in 1938; no other pitcher has yet to match Vander Meer's feat.

Check out the box score here: http://www.baseball-reference.com/boxes/CIN/CIN194706180.shtml
Posted by Wade Forrester at 1:02 AM