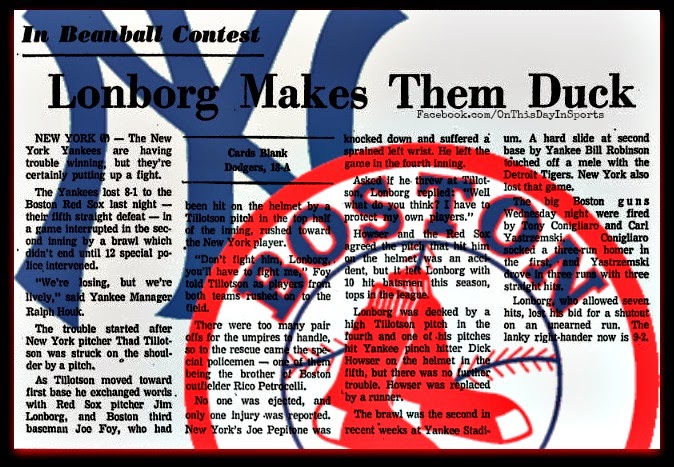 On June 21, 1967, all hell broke loose at Yankee Stadium in New York during the second inning of a contest that featured Red Sox and Yankees. The Red Sox had jumped out to an early lead with a four run first that was highlighted by a three run shot off the bat of Tony Conigliaro. The melee started in the second, when Yankees hurler Thad Tillotson hit third baseman Jim Foy in the helmet. It was just the precursor to the brawl that was going to take place in the bottom half of the frame, as Jim Lonborg went to the mound ready to retaliate. He gave up a leadoff single, recorded two outs, before that retaliation would come. Tillotson was the next man up, and Lonborg left a nice baseball shaped bruise on his shoulder within moments of him settling into the batters box. An angry Tillotson began his march toward first base jawing at Lonborg, and next thing you know the fists were flying. It took several minutes and 12 police officers to restore order.

Nobody was ejected (just goes to show how different things are today), and no major injuries were reported. Although, Joe Pepitone did have to leave the Yankees lineup in the fourth due to a sprained wrist that resulted from the scrap. Pepitone was in the Yankees lineup during their next game. While it looked like order was restored, Tillotson threw a pitch that caused Lonborg to hit the beck in the fourth, and in the fifth Lonborg hit Dick Howser in the helmet, and Howser had to leave the game. Despite all of this there were no ejections, as Lonborg went the distance, and only allowed a run, while his teammates plated eight runs total.

Check out the box score here: http://www.baseball-reference.com/boxes/NYA/NYA196706210.shtml
Posted by Wade Forrester at 1:14 AM