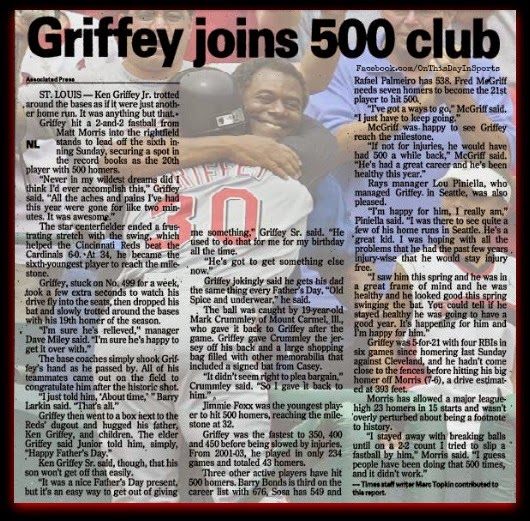 On June 20, 2004, Ken Griffey Jr. celebrated Father's Day in St. Louis by hitting his 500th home run. The solo shot off of Matt Morris in the top of the fifth put the Reds up 5-0. The club from Cincy scored another run in the sixth, and cruised to a 6-0 victory, with Jung Bong and his bullpen combining for the shutout. The moment was particularly special because Ken Griffey Sr. was in the crowd at Busch Stadium, and as soon as his home run trot was complete he went over to his Father and hugged him, as the fans gave Griffey Jr. and his family a standing ovation. It was most definitely a Happy Father's Day. Griffey Jr. was just the 20th man to reach the plateau. He hit 130 more home runs before he retired in 2010.

As many of you know I am a native St. Louisan, and I was born a Cardinals fan. With that said, this was one of the greatest moments that I have ever seen happen against the team that I call my own. It was truly a special moment at the ole ballpark. Root for your team; love the game.

You can view Griffey Jr.'s home run log here:
http://www.baseball-reference.com/players/event_hr.cgi?id=griffke02&t=b
Posted by Wade Forrester at 2:28 AM