June 20, 1927: Jack Scott Goes The Distance In Both Ends Of A Doubleheader 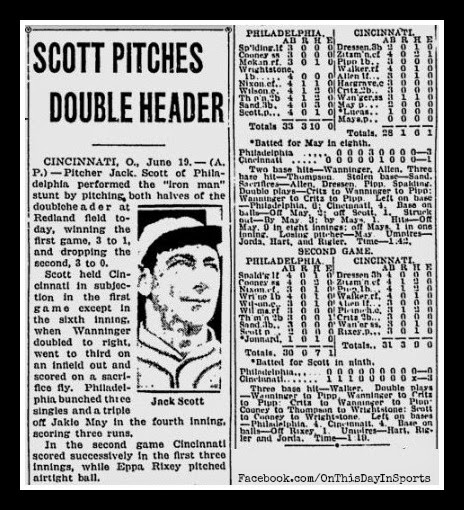 On June 20, 1927, Philadelphia Phillies hurler Jack Scott started and went the distance in both ends of a doubleheader at Redland Field in Cincinnati. The 35-year-old veteran had to settle for a split in the contests, as he surrendered just six hits, and only gave up a run in the first contest. He benefitted from a three run third that saw Fresco Thompson and Heinie Sand knock in the runs. Scott surrendered three runs through the first three innings in second contest, before settling in the rest of the way. Unfortunately for him, his team could not get to Eppa Rixey who tossed a complete game shutout. Scott is the last pitcher to start and pitch complete games in both ends of a doubleheader, and it is safe to say it will not be matched again.