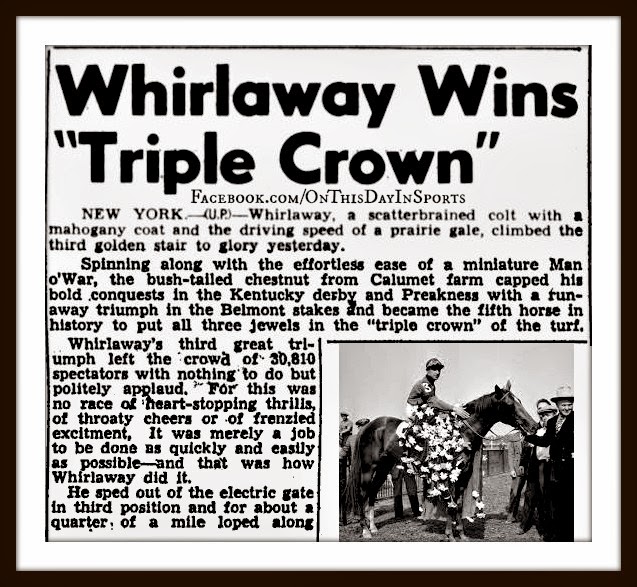 On June 7, 1941, Whirlaway became the fifth horse to claim horse racing's Triple Crown by blowing away the field with a three length victory at the Belmont Stakes. The horse who was destined to make history came into the race a favorite, but was considered a back of the pack runner, as he had come from behind in both the Kentucky Derby and the Preakness. The victory at the belmont would be much different as Whirlaway came out of the gate on fire and opened up a huge eight length lead. An article that appeared in the Pittsburgh Press said that as Whirlaway's jockey Eddie Arcaro got off to the hot start, he turned and screamed to his competitors "Go to hell! We're off to the races!" And he was not kidding around, as he rode the thoroughbred into the huge lead. Robert Morris ridden by Alfred Robertson made a hard charge late to close the gap, but could not overcome Whirlaway who became a select member of a coveted club the moment he crossed the finish line.

This link is to  a very cool video that has footage from all three stages of the Triple Crown, as well as the story of Whirlaway: https://www.youtube.com/watch?v=6o-5TR0m5N8

Personally, I found Whirlaway's win at the Preakness absolutely remarkable. I have seen a lot of things when it comes to professional sports, but I do not remember the day Affirmed took the Triple Crown in '78. I was just 10 months old at the time, and had not learned how to turn the channel yet. I wanna to see it happen; Maybe today. Good Luck to California Chrome.
Posted by Wade Forrester at 12:33 AM