June 14, 1949: Eddie Waitkus Gunned Down By a Mentally Unstable Fan 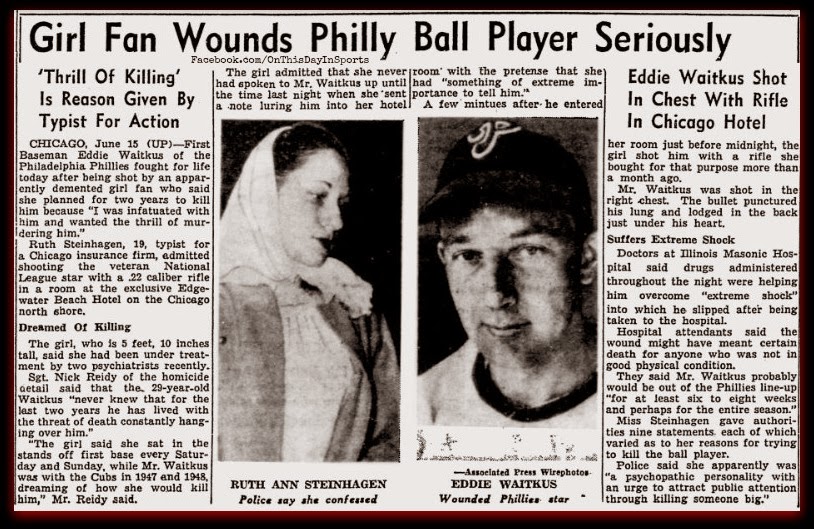 One of the most unusual stories from baseball's past unfolded at a Chicago Hotel on June 14, 1949, as an obsessed 19-year-old fan by the name of Ruth Ann Steinhagen shot, and nearly killed Philadelphia Phillies first baseman Eddie Waitkus. Steinhagen had become infatuated with Waitkus three years earlier when he found his spot in the big leagues with her hometown Cubs.

Over the three seasons that followed Waitkus proved that he belonged in the big leagues, with his high point being when he was selected to the All Star game in 1948. In the winter that followed the All Star selection Chicago shipped him to Phillies. The trade turned Steinhagen's infatuation into a deadly one, and after the Phillies had beaten the Cubs 9-2 on that day in mid June, she was lying in wait.

Steinhagen had checked herself into the ballplayer's hotel on that fateful day, and left him what would become an infamous note that was set to lure him to his death.

The note read: "Mr. Waitkus, it is extremely important that I see you as soon as possible. My name is Ruth Ann Burns and I'm in room 1297A. We're not related, but I have something of importance to speak to you about. I think it would be to your advantage to you as I am leaving the hotel the day after tomorrow. I would appreciate it greatly if you could see me as soon as possible. I realize this it out of the ordinary, but as I say it is extremely important. Please come soon. I won't take up much of your time I promise." 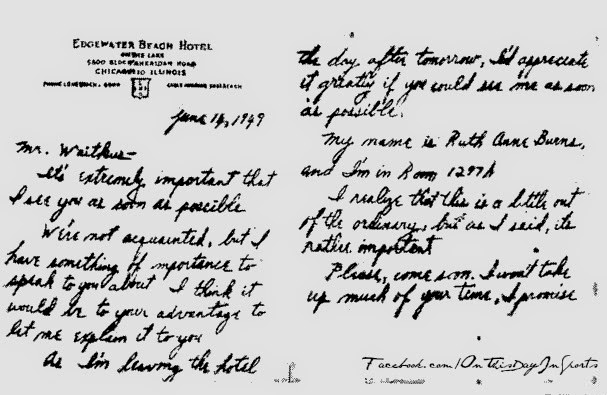 By his own account the 29-year-old Waitkus said that he spoke with her on the phone before heading to her room. He said that curiosity had gotten the best of him because she was so serious about being able to talk to him in person. He went up to her room, knocked, then she opened the door, and he walked in. She had said that she planned on stabbing him, but he passed her too quickly, and found himself a seat.Waitkus described it as a bad dream, as Steinhagen told her that he was not going to bother her any more, before she pulled a .22 caliber rifle out of a closet and shot him. The bullet just missed his heart, hit him in the lung, then lodged near his spine. The man who had been playing on a big league diamond earlier that day was suddenly in a fight for his life. He went into immediate shock, and had to be given oxygen, as well as multiple transfusions to keep him alive. Several surgeries were performed, before doctors were able to successfully remove the bullet. 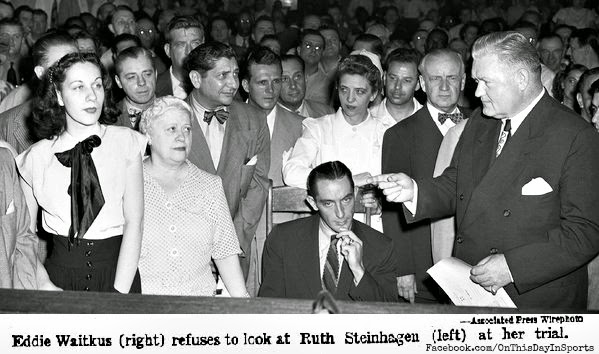 Before the bullet was even removed from the body of Eddie Waitkus, Steinhagen was deemed insane and committed to an insane asylum. It was very clear that she had major mental issues immediately after the incident, as she calmly called the hotel operator to report she had shot a man. When she was initially asked why she had done it she said "I'm sorry I shot him, but I don't know why." She would tell the police that "She was fit for a psychiatrist." And that she was. In the days that followed, with a speedy court process in effect, Steinhagen wrote an autobiography with a picture of Waitkus in front of her for doctors to study before she faced a judge. She was truly a troubled soul as she expressed how she could not live without the man she had never met before the day she had shot him. When the court found her insane Waitkus sat just a few feet from her, but chose to not so much as glance at the woman who had forever changed his life. Steinhagen spent three years in the insane asylum before being released. She stayed out of the public eye until she passed away at the age of 83 in 2012. 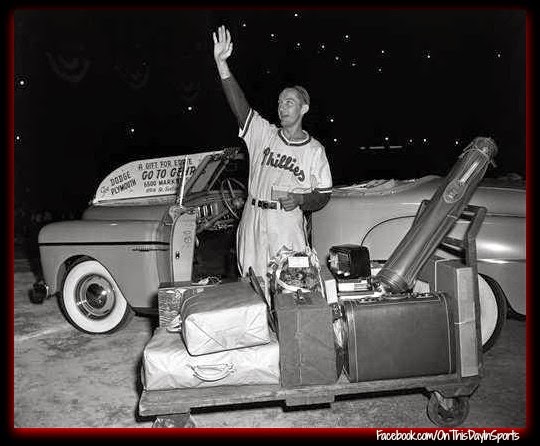 The incident did not end the career of Eddie Waitkus. It did cause him to miss the rest of that '49 season. However, he returned to Shibe Park on August 19th, and before a crowd of more than 25,000 Eddie Waitkus Night was held. In full uniform, Waitkus spoke to the crowd, and let them know that no matter what the future held for him he appreciated their support. Acting on behalf of National League President Ford Frick Phillies manager Eddie Sawyer gave his first baseman an award that commemorated a selection to the All Star game. Waitkus was not able to play in the game, but he had been leading all first baseman in the polling before he was shot. The ceremony ended with Waitkus being showered with gifts that included a brand new Dodge, a television set, two radios, luggage, golf clubs, two suits, a wristwatch. All of the gifts came from local businesses who chose to show support for the man who was still on a road to recovery.

Waitkus made a triumphant return to the diamond in 1950, and obtained the nickname "The Comeback King" as he helped the Phillies win the National League Pennant with his .284 average. Waitkus played in the big leagues until he retired after the '55 season. While he put up respectable numbers, it was said  that he was never the same. He suffered from depression following the incident, which led to alcoholism, and a failed marriage. It is likely that it haunted him until he passed away, after a battle with cancer, at the age of 53, in 1972.

Waitkus who was once called "The Natural" because of his gifts on the diamond would end up being a part of the inspiration, for a book, then subsequent movie that featured the same title. While the book/movie is very different than the story of Eddie Waitkus, the author admittedly used his the infamous incident to help form a fictional story that revolved around the life of Roy Hobbs.

While researching the story of Eddie Waitkus, I ran across an account of a friend of Steinhagen's who said that she had been obsessed with other ballplayers, and even a movie star before she latched onto Waitkus. It is important to not make light of mental problems, especially when you consider the day and age in which we live. It is hard to say if that friend had any idea that Steinhagen was capable of carrying out such a heinous act, but as we read stories like this one, it is important to try and recognize those who might be on the edge of making a choice that will forever change the lives of others. All too often we turn on the news and see that there has been a shooting, and I believe that we as a society must be vigilant in doing our part to prevent tragedies. If you ever think someone is even capable of such a thing call your local law enforcement and make it be known. You never know, you might just become a hero who helps save a person's life. Luckily, in the case of Eddie Waitkus he lived to play another day.

You can view the career numbers of Eddie Waitkus here: http://www.baseball-reference.com/players/w/waitked01.shtml
Posted by Wade Forrester at 2:59 AM