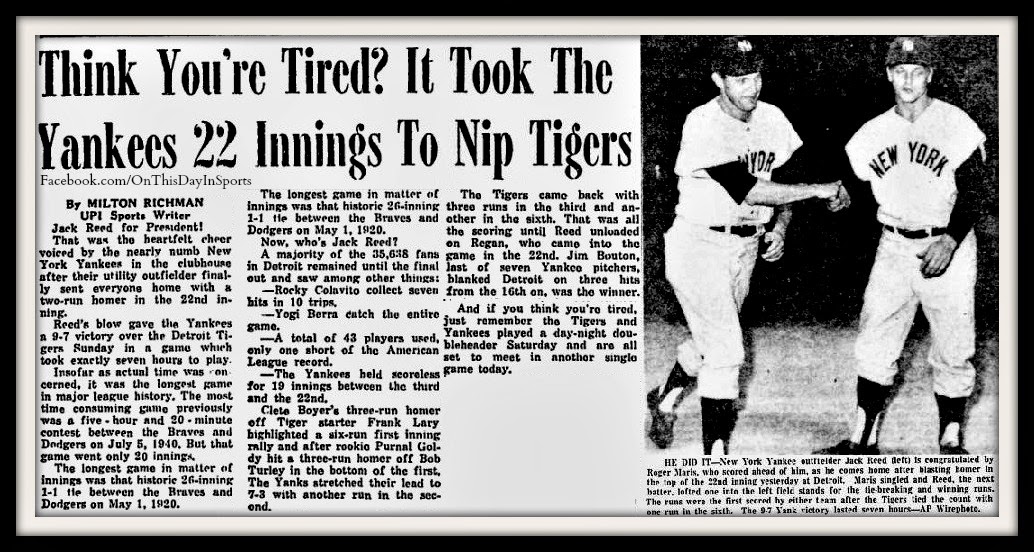 On June 24, 1962, the New York Yankees and the Detroit Tigers played a 7 hour, 22 inning marathon in Detroit. The contest was decided by an unlikely hero by the name of Jack Reed who launched a two run homer into the right field seats at Tigers Stadium in the top half of 22nd that gave the Yankees a 9-7 lead. It went into the books as the longest game ever played as far as length goes, and while that record has since been surpassed, it still stands as the longest game ever played in the history of the Yankees organization. A total of 167 at bats were taken between the two clubs combined, Yogi Berra caught every inning for the New Yorkers, eight different players had 10 at bats in the game, and New York's second baseman Booby Richardson had 11 at bats. On the Detroit side of the diamond Rocky Colavito picked up seven hits in ten trips, but he would not reap a reward for his outstanding effort as the Yankees prevailed because of Reed's heroics. Reed had a short lived career in the big leagues and the big blast was the only home run of his career. It was a home run that forever cemented him into the history of the club.

This link will provide you with a variety of franchise records that have been set by the Yankees organization throughout the years: http://newyork.yankees.mlb.com/nyy/history/single_game_records.jsp
Posted by Wade Forrester at 12:34 AM