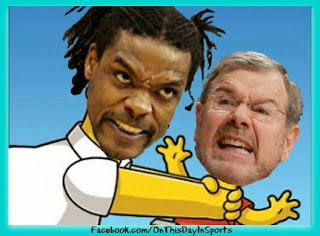 On December 1, 1997, Golden State Warriors All Star guard Latrell Sprewell choked his head coach P.J. Carlesimo after a heated exchange during practice. The incident began with Sprewell making a few lazy passes as the team prepared for the next opponent. His coach told him to sharpen things up, in turn Sprewell told him he wasn't in the mood for it and threatened to kill him. When the coach shot back with "I'm right here" Sprewell grabbed him by his throat and for a brief moment the threat looked like he might just go through with it as both coach and player went to the ground with the hands of Sprewell around Caliesimo's neck. The melee was broken up quickly then Sprewell was removed from  the practice only to return 15 to 20 minutes later to confront the coach again before throwing a punch at him. After the second incident Sprewell stormed into the General Manager's office and expressed his desire to get out of Oakland. Not only would he be suspended for 10 games, he got his wish the Warriors released him which voided more than $27 million that he had left on his deal. The lockout that shortened the next season would keep him off the NBA radar until he was signed by the Knicks in 1999. He spent the next 5 seasons in New York and made his fourth and final All Star appearance of his career with a Knicks uniform in in 2001. After the 2003 season he was a part of a four team deal that landed him in Minnesota where he spent the last two seasons of his career. With Sam Cassell and Kevin Garnett on his sides they became one of the best scoring trios in the league as they made a trip to the Western Conference Finals where they lost to the Laker. Disagreements in what he should be paid ended the career of Sprewell. He was insulted by a 3 year $21 million offer that would lead to an early end of his career at the age of 34. The story of Latrell Sprewell is an interesting one. He was obviously a very talented player that had a solid career in the NBA. Unfortunately for him he will be remembered for one bad moment, but the way I see it is that was of his own doing. Gotta think before you act. When it comes to the early retirement, I guess he had plenty of money and a championship didn't mean that much to him. Sprewell received offers from several legitimate contenders and turned them down simply because he felt he was worth more than those offers. I try hard not to criticize athletes for the choices they make because I do believe it is their own life and they can live it how they choose. With that said, I also have a great appreciation for athletes that will go to the ends of the earth simply to win a championship. When it comes to Sprewell if he is happy with the choice he made, I guess that is all that matters. I know capping off a career with a title would have been a much better ending to a story about some guy who lost his shit and choked his coach.