December 6, 1973: The Owners Approve a Move To Washington For The Padres 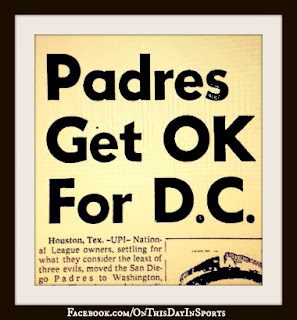 On December 6, 1973, the owners of the National League ballclubs voted that the sale of the San Diego Padres would be approved to Washington D.C. businessman Joseph Danzanky who planned to move them to D.C. the next season.  There were two options to keep the team in San Diego. The first was Marge Everett a race track owner that promised to keep the team in the city. It fell apart for her after allegations arose that she was involved in a political bribery scandal that involved the Governor of Illinois Otto Kerner. The other option was to let C. Arnholdt Smith continue to run the team, he had bought them in 1955 when they were a Pacific Coast League franchise and would be granted an expansion franchise in 1967, two years later the Padres were a major league ballclub. Smith, a high school dropout that worked in a grocery store before becoming a messenger for the Bank of Italy which we happen to call the Bank of America now days, worked his way up the ladder while saving up for one of the biggest investments of his entire life. That investment was into the United States National Bank. With the help of his brother who was in the oil business, Smith became the majority share holder and would build an empire that included a wide variety of investments as well as the Padres franchise. Things came crashing down for him in 1973 when the United States National Bank collapsed with an outstanding debt that exceeded $400 million. At the time it was the biggest bank collapse in the history of the United States. While the owners considered letting him remain in control it hardly seemed like a viable option. Danzansky, the owner of a very successful grocery chain tried to keep the Senators from moving  to Texas in 1971 and when he saw the trouble brewing in San Diego he put his name in the hat hoping to bring baseball back to the nation's capitol. Danzansky had formally purchased the club in May of that year for $12 million, he had jumped many hurdles along the way to make it happen and the owners vote looked like his dream could become reality. They went as far as designing new uniforms, issuing Topps baseball cards that projected a Washington National League team, as well as projecting an opening day start that was to be held at RFK on April 4, 1974. What followed the owners vote was a fierce legal battle by the City of San Diego. It was a fight they wouldn't lose, the team had 15 years left on a 20 year lease and the city would seek damages if the team was to relocate. Danzansky failed to reach the deadline to cover the damages by the lawsuit and at the last minute Ray Kroc bought the team and guaranteed the team would be staying in San Diego. Kroc, another self made millionaire had worked in radio, sold paper cups, then started a little short order food joint that he called McDonalds... that worked out quite well. He owned the team until he passed away at the age of 81 in 1984. After his wife inherited the club she tried to donate it to the City of San Diego only to have the rules keep her from doing so which led to a sale in 1990. They have since changed hands since then but one constant has remained the same, which is they remain in the city in which it all began.

This is a fact about something that never happened. I couldn't help but find it interesting because you just never know how it would have all turned out it could have a proverbial "Butterfly Effect" on the entire game. Just think of the possibilities such as; There would be no team called the Nationals playing in Washington. Would there still be a team in Montreal? I doubt it but there might be a team in Oklahoma City, Portland, or North Carolina. From there the possibilities are endless with how it would have effected standings,division realignments along with player and personnel decisions.
Posted by Wade Forrester at 3:03 AM