December 31, 1973: The Fighting Irish Win A Shootout At The Sugar Bowl 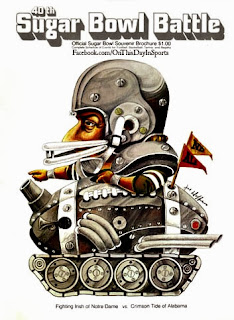 On December 31, 1973, the Notre Dame Fighting Irish took the National Title with a 24-23 Sugar Bowl victory over the Alabama Crimson Tide in front of more than 85,000 at Tulane Stadium in New Orleans. It was a battle of unbeaten teams with Notre Dame sitting at 10-0 while Alabama posted an 11-0 record during the regular season. Not only was this a great battle for squads on the field it was also a great battle of football minds as two coaching legends sat on each sideline, Ara Parseghian for the Irish and the one and only Bear Bryant guiding the Tide. This was guaranteed to be a great game before the ball was snapped and it owned up to the expectations. It was a seesaw battle that saw the lead change hands six times. The Irish got on the board first with a 6 yard touchdown run from fullback Wayne Bullock, their kicker Bill Davis who had converted on 51 of 53 attempts missed the extra point. 'Bama back Randy Billingsley put his squad in front with a 6 yard touchdown run of his own that literally turned the tide to the tune of 7-6 as he watched his kicker convert on the PAT. The joy of taking the lead was short lived, on the ensuing kickoff Irish freshman Al Hunter blazed down the field with a record setting 93 yard return, quarterback Tom Clements tossed a perfect pass to back the back of the endzone to convert for two and the score was now 14-7 Notre Dame. Before the end of the half Bill Davis cut the Notre Dame lead to 14-10 with a 39 yard field goal. The battle continued in the third with the teams trading touchdowns, first came a 5 yard touchdown run from Alabama's Wilbur Jackson, then Notre Dame's Eric Penick responded with a 12 yard touchdown run that put the score at 21-17 as the teams headed to the fourth. Alabama took the lead on a trick play that saw quarterback Mike Strock connect with backup quarterback Richard Todd on a 25 yard touchdown pass, after Bill Davis missed his second extra point of the day they held a 23-21 advantage. That one point would haunt Davis and the Crimson Tide as the Irish walked down the field and Bob Thomas booted the ball through the uprights to give the team from South Bend the 24-23 lead. The greatest drama of the entire day came with just minutes to go in the ballgame, fateful and gutsy decisions would determine the National Champion. With three minutes to go, facing a fourth down Bryant sent his punting unit out and his punter Greg Gantt delivered a kick that pinned the Irish at the one. However, Gantt was run into on the play and Bryant could have taken the ball back and faced a fourth and five, instead he chose to hold on to the field position and let his defense get the job done.  It looked like it was a sound strategy as the Irish found themselves facing a third and nine situation from the two with just a little more than two minutes left on the clock. If they could convert they would be able to run out the clock, if not Alabama would have a chance to win the ballgame. With it all on the line Tom Clements dropped back and after he couldn't hit his primary target he found backup tight end Robin Weber on a 38 yard connection that would preserve and Irish victory. This was the first reception of the season for Weber and the biggest reception of his football career as it helped the Notre Dame Fighting Irish cap off that '73 season as National Champions.

I would like to wish everyone a Happy New Year. Be safe and please don't drink  and drive.