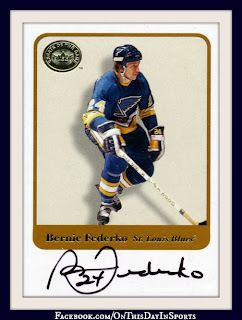 On December 13, 1983, Bernie Federko became the all-time scoring leader in the history of the St. Louis Blues organization when he recorded his 576th point in a 4-1 win over the Blackhawks in St. Louis. The Blues star center had sat at hospital the night before awaiting the arrival of his second son. After his son was born the whirlwind of a new edition was upon him which meant hardly any sleep for the 27 year old. When he got to the rink, a bleary eyed Federko passed out cigars, received numerous congratulations, and shook every hand that was extended toward him before he laced up the skates and turned his focus to the archrival Blackhawks. Federko's teammates Joe Mullen was instrumental in the victory as he scored his first of two goals to get things going early in the contest. The second goal of the game came in the second period when Federko took a rebound off the back glass and knocked it past Chicago netminder Murray Bannerman  to tie Garry Unger's franchise mark of 575 points. The crowd in St. Louis cheered Federko ecstatically as they knew they had just witnessed history. The historic night was far from over for Federko and the Blues. A minute and twenty three seconds after Federko's goal Jorgen Peterson lit the lamp after the Blues won a faceoff in the Blackhawks zone. 32 seconds later Mullen scored his second goal of the game which was assisted by Federko making him the all-time scoring leader in franchise history while opening up a commanding 4-0 lead. The Blues goaltender Mike Luit nearly added a shutout to the end of this tale but with just about  a minute to go it was broken up and the Blues had to settle for the 4-1 victory. Federko would later say that he was running on adrenaline and surpassing Unger's record had hardly sunk in. He was playing in his seventh season with the note on his chest and was on his way to legendary status in the Gateway City and beyond. He played 13 of his 14 years in the Lou scoring 1,073 points and still remains the top scorer in the history of the franchise. Only the great Brett Hull can boast more goals in a Blues uniform and no man has worn that uniform on the ice more than he has. In 1992, less than a year after he hung up the skates, the Blues organization retired his number 24. In 2002, he joined the ranks of the Hockey Hall of Fame, and today he has a statue outside of the Scottrade in St. Louis that reminds Blues fans young and old that Bernie Federko was one of the greatest to ever wear The Note.

Some might say that Bernie Federko was underrated in his time, he played in an era that had names like Gretzky, Bossy, and Yzerman across the backs of the jerseys around the NHL which might have made it  rather difficult to get deserved recognition. The fact that the Blues play in a smaller market and he wasn't able to hoist The Cup might be reasons that might be as well. I can tell you this, as someone that was born, raised, and still resides right outside of St. Louis. I have great appreciation for everything he did. He playing days came a generation before I was tuning in so I never did watch him on the ice but much like Stan Musial I didn't have to see it with my own eyes to appreciate the things they did. There is a long list of athletes that I talk about on a daily basis that the same can be said about. We all have athletes in our respective cities that will remain a part of the community after their playing days are over. Personally, I have a great appreciation for men like that. They don't just play in the city, they are part of the city.

Posted by Wade Forrester at 4:23 AM