December 27, 1958; The Colts Pummel The Giants For The Title 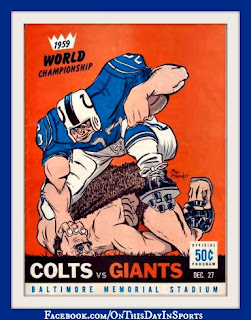 On December 27, 1959, with nearly 60,000 on hand at Memorial Stadium in Baltimore, the Colts exploded for 24 points in the fourth quarter of the NFL Championship game and took the title with a 31-16 victory over the New York Giants. The Giants came into the contest looking to avenge a heartbreaker of a loss in the title game a year before. In the '58 matchup the Colts prevailed 23-17 after going into overtime to decide a victor. Much like the year before the Giants would walk away with broken hearts as Johnny Unitas led his team to back-to-back titles as he threw for two touchdowns and scored another one with his legs. His first touchdown pass came on the first drive of the game as he faked a handoff to fullback Alan Ameche on his own 40 then fired it to wideout Lenny Moore on the New York 38 where Moore was off to the races. It was all the offense that the Colts could muster in the early going as the Giants defense held Unitas and his boys at bay. On the Giants side of the ball, every time they seemed to be clicking on offense the drive would stall which led to three field goals from the foot of Pat Summerall. The Giants defense had put together a more than impressive third quarter. In fact, the Colts only picked up one first down in the period and that only came in the waning moments. That same defense began to waiver in the fourth as Unitas led his Colts on a 10 play 86 yard drive that ended with the signal caller taking it in with his own legs from the 4 yard line giving them a 14-9 lead. Once the Colts were ahead, New York's quarterback Charlie Conerly went to the air in hopes of retaking the lead. He had one little problem and that was the Colts defense who picked him off three times. The first pick was a backbreaker, deep in his own territory, Conerly attempted a 25 yard pass to Kyle Rote only to have defensive back Andy Nelson come flying in and snatch the ball out of the air. Nelson raced 16 yards all the way to the Giants 14 before he was hauled down. Two plays later, Unitas tossed his second touchdown pass of the day, a lob to the corner that Jerry Richardson found cradled in his hands. It was all the Colts would need even though they would tack on a couple more scores before New York could answer back. The next two possessions by the Giants ended in the hands of Colts defensive back Johnny Sample, the first pick by Sample turned into 6 points as he ran it back 42 yards into the endzone. His next pick set up a 25 yard field goal which capped off the scoring for the lightning in a bottle fourth quarter for the Colts. With 32 seconds left in the game Conerly found Bob Schnelker open and connected with him on a 32 yard catch and score. It was too little too late as the game had been decided and the Baltimore Colts were the Champions of the NFL.