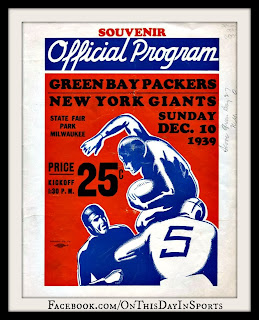 On December 10, 1939, the Green Bay Packers won the NFL Championship title in convincing fashion as they toppled the New York Giants 27-0 in front of a record setting crowd at the Dairy Bowl in Wisconsin. Both teams had put together spectacular regular seasons. The Giants had posted a 9-1-1 regular season record to claim the Eastern Crown while the Packers posted an equally impressive 9-2 record to claim the Western Crown. The battle to name a champion was a a rematch of the title game from a year before in which the Packers lost 23-17 to the squad from New York. They didn't just avenge their loss they pitched the first shutout in NFL playoff history. The game looked like it was going to be a defensive battle in the first half as they went to the locker rooms with the Pack up 7-0 with the lone score coming on a 7 yard touchdown grab by Milt Gatenbein that was tossed by Arnie Gerber. The second half was a whole different ballgame and everyone on the Packers offense got in one the action. The Green Bay offense was effective on the ground and in the air as well. It seemed like every man on the Packer roster came up with a play when his number was called as the offensive unit was clicking on on every level and that included the outstanding blocking of an offensive line that showed no weakness. The Packers D looked every bit as good as their offense as they formed a wall that rejected anything the New York offense threw at them as the frustrated the Giants all day long.  The third quarter featured Joe Laws as the primary offensive threat. Twice Laws led the Pack into enemy territory. The first time the drive stalled but it was still productive as Tiny Engebretsen parked one through the uprights from 29 yards out. The second time Laws and company were able to cap it off with a 31 yard connection from Isbell to Laws that gave the Pack a tight 17-0 grip on the ballgame. On the defensive side of the ball Charlie Brock seemed to be the driving force behind the Packers attack. He was described as a man possessed, if he wasn't in the backfield stopping the run dead in its tracks he was picking off a ball that ended the only true scoring threat by New York. Every time the Giants looked to have any momentum the Packers would come up with a play that swung the pendulum back to the Green Bay side. In the fourth the Packers continued on their path to a championship. Isbell setup the first points of the half with a 31 yard pass to Harry Jucinski who made a spectacular shoestring catch. The drive stalled after a fumble nearly turned the tide but everything was going the Packers way that day and after they recovered. Ernie Smith hit a field goal from 42 yards out. The scoring was capped off with a 1 yard run by Ed Jankowski just minutes after his teammate Bud Svendsen intercepted a ball  on the New York 30 and took it back to the 15 before he was tackled. Late in the game the Giants nearly rallied to avoid the shutout but just couldn't get the job done as the Packers defense stood tall until the end.

The recorded attendance for this game was a record setting 32,279 people. The $83,510.35 that was brought in at the gate also set a new record. By todays standards that would be $1.4 million. The money was divided among the players as well as the organizations. The 33 members of the Packers received a little more than $700 apiece. By todays standards that would total nearly $12,000. The 34 players on the Giants roster received a little more than $450 which would equal a little more than $7,500 today. I throw this information in because in the day and age we live in those numbers would be scoffed at. Just something to think about.
Posted by Wade Forrester at 2:49 AM