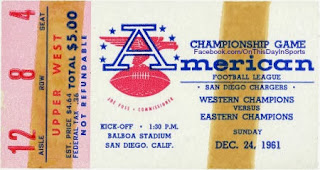 On December 24, 1961, the Houston Oilers repeated as Champions of the AFL with a 10-3 win over the Chargers in the title game at Balboa Stadium in San Diego. Led by George Blanda and Billy Cannon, the Oilers posted a 10-3-1 record during the regular season and were an offensive powerhouse as they scored 513 points on the year. At the time the 513 points set a professional record for points in a season. The Chargers went 12-2 with Jack Kemp under center which led to a showdown for the title. Blanda, a 10 year veteran of the NFL had come over to the upstart league one year earlier and led the Oilers to the first ever AFL title with a 24-16 win against those same Chargers. While many might have expected another high scoring affair in the championship rematch, they got the complete opposite. Both teams watched scoring opportunities go down the drain early in the contest. Midway through the first quarter Kemp fumbled on his own 37 and the Oilers recovered then marched it down to the San Diego 14 only to have Bud Whitehead pick Blanda off. Then late in the first, Kemp fumbled again, this time it was on the San Diego 24 which looked like it set Blanda up for a field goal from the 19. A bad snap from the center ended up all the way on the San Diego 46 where it was finally recovered by the Chargers squashing the scoring opportunity. The Oilers were finally able to put three points on the board with a Blanda field goal at the 8:06 mark in the second quarter. The straw that broke the camels back came when Blanda capped off an 80 yard drive by taking the snap at the San Diego 35, then as the Chargers defense came pouring in on him he found Billy Cannon at the 17 and put it up in the air, Cannon hauled it in and raced to the endzone with defenders trailing behind him. The Chargers avoided the shutout by tacking on a field goal in the opening minutes of the fourth but that all they could drum up and the Oilers would finish the day as the Champions once again. By the time the game was in the books San Diego had picked Blanda off six times, while the Houston D forced 7 turnovers of their own. Some called it sloppy play, I tend to look at that as taking credit away from the defenses. Both of those defensive units played one helluva game. Blanda and company broke through just enough to win the ballgame. This was the last championship title for the Oilers franchise that would later join the NFL then move on to Tennessee in 1997 where they became the Titans. Even so, the franchise had a rich history in Houston that I hope is remembered. A lot of great players wore that uniform in Houston.