December 7, 1980: Montana Leads The Way In The Comeback at The Stick 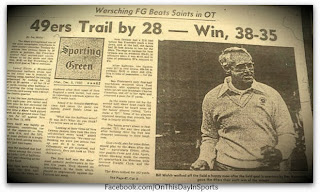 On December 7, 1980, the San Francisco 49ers pulled off the biggest regular season comeback in the history of the NFL. They rallied from a 35-7 halftime deficit to an improbable 38-35 overtime win over the New Orleans Saints in front of a very pleased crowd at Candlestick Park in San Fran. The game was a tale of two halves. Archie Manning owned the first half as the Saints signal caller fired three touchdown passes and put up 248 yards through the air. His squad jumped to a 21-0 lead before surrendering a 57 yard punt return touchdown to San Francisco's Eddie Solomon. The punt return looked like it hardly phased Manning and company as they tacked on two more touchdowns that gave them the commanding 35-7  halftime lead. The Saints came into the contest with an 0-13 record and as they sat in the locker room they had to feel pretty good about their chances of getting that monkey off their back. In the Niners locker room Bill Walsh must of gave the halftime speech of a lifetime. Led by a young quarterback by the name of Joe Montana the 5-10 Niners showed they weren't going to give up easily. In the third quarter Montana began the insurmountable comeback by capping off  the first drive of the 2nd half  with a one yard touchdown run. Then he unleashed a 71 yard bomb to Dwight Clark that shrank New Orleans lead to 35-21.  The Saints held them at bay until the 6 and a 1/2 minutes mark in the fourth. The 14 point was cut in half as Montana connected with Solomon on a 14 yard strike, minutes later the Niners were driving again and they capped off a drive with a 7 yard touchdown run by Lenvil Elliott that knotted the score at 35-35 with just 1:50 on the clock. The Saints won the toss but quickly went 3 and out and were forced the punt. The Niners began the game winning march from their own 34. At one point it looked like the Saints had them stopped but a personal foul on a third down gave them new life as they would have almost surely punted the ball. Four plays after the penalty Ray Wersching came in and booted the ball through the uprights from 36 yards out. The field goal put an exclamation point on the biggest regular season comeback in NFL history. I look through a lot of newspapers to come up with good material for these facts. With the teams both struggling in the standings this game was a bit of an afterthought despite the fact that it was a comeback for the ages. Over the course of time it has proven to be a bit of a coming out party for that kid Joe Montana. He was just 24 years old at the time and had sat behind Steve DeBerg on the depth chart up until the midway point of that 1980 season. The game against New Orleans was more than just a remarkable comeback, it might have just been the beginning of one of the greatest dynasties that the NFL has ever seen.

You can watch each of the touchdowns here: https://www.youtube.com/watch?v=T62YIM1RaJU and you can check out the box score here: http://www.pro-football-reference.com/boxscores/198012070sfo.htm
Posted by Wade Forrester at 2:18 AM