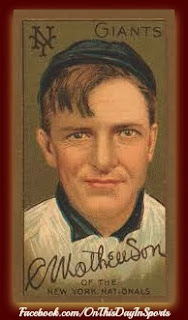 On December 15, 1900, the Cincinnati Reds traded a 19 year kid by the name of Christy Mathewson to the New York Giants for Amos Rusie. The pitcher swap would turn out to be one of the worst trades in the history of the game as Mathewson went on to forge a Hall of Fame career in New York while Rusie appeared in just three games for the Reds posting an 0-1 record. At the time of the trade Cincy looked to be getting a veteran pitcher that was known for throwing the heat, led the league in strikeouts five times,won 20 or more games eight times and won 30 or more 4 times while building a Hall for Fame career of his own. Unfortunately for the Reds they wouldn't see the production that he had in the past. In 1898, an arm injury coupled with a line drive to the head would keep him on the shelf for the next two seasons that led to the trade with the Giants. It's hard to say now what they were thinking at the time but I would imagine the idea of a fresh start for the future Hall of Famer along with bringing in some youth to New York might have been a motivating factor in the deal. Who knows, the Giants might have known that Rusie was done and just made the swap to get out from under his contract. Whatever the factors were what they got in return with Mathewson was a pitcher who would build one of the most storied careers of his era. By 1901, Mathewson recorded his first 20 win season, he would accomplish that a total of thirteen times and would win 30 or more 4 times. By 1905, helped lift the Giants to a World Series title after putting together a season that not only ended with a championship he also took home the pitchers triple crown as the league leader in wins, strikeouts and earned run average. Mathewson accomplished the triple crown feat once again in 1908 as he continued to show that he was one of if not the best pitcher in all of baseball. He spent 17 years in the Big Apple and won 372 game there while losing just 188. His career went full circle after being traded back to Cincinnati in 1916.  Nearly 16 years after the trade that sent him to New York, Mathewson picked up the last and 373rd win of his career, it was his only appearance as a member of the Reds. I bet they wished they would have never let him go. He would remain with the club in a manger role for several seasons before retiring from the game. An inaugural member of the Baseball Hall of Fame, Mathewson found his way into baseball immortality in 1936.

If you would like to learn more about the life and times of Christy Mathewson check this out: http://sabr.org/bioproj/person/f13c56ed

Posted by Wade Forrester at 3:21 AM