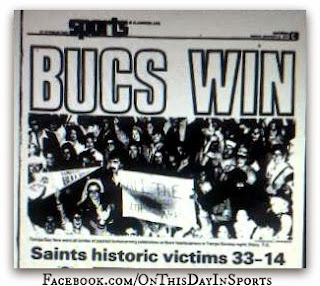 On December 11, 1977, a huge monkey was lifted off the back of each and every person affiliated with the Tampa Bay Buccaneers organization after the team recorded a 33-14 win over Saints in New Orleans. It was the first win in the history of the organization after they had rattled off 26 losses since they had joined the league one season earlier. The Bucs were considered the laughingstock of the league due to their struggles and when the quarterback of the Saints Archie Manning was interviewed before the contest he said it would be a disgrace to lose to the lowly team out of Tampa. Nothing like giving a team a little bulletin board material to feed off of and the Tampa Bay defense feasted on Manning and the Saints offense. The Bucs defense hauled in six picks and produced five sacks. Up to that point in the season the Bucs had scored 53 points on the entire year and had been shutout six times as they continued to go through the struggles of building a franchise. The tide turned in New Orleans. The first half scoring came from a pair of field goals by Dave Green, then a six play 71 yard march led by Gary Huff was finished it off by him throwing a 5 yard touchdown pass to Morris Owens. With the score 13-0 as the teams headed to the locker rooms at the half the head coach of the Bucs John McKay felt good about the way his team was playing but as you could imagine after 26 losses in a row he nor any of his players were comfortable with the slim lead. The hope was to score quickly in the second half to open up the margin and they did exactly that. On the second play of the second half Bobby Scott who had taken over at quarterback for Manning tossed a pick that Mike Washington took 45 yards to paydirt opening up a 20-0 lead. It was the first pick six in the history of the organization. The second pick six in the history of the organization came on the second play of the fourth quarter when Scott dropped back into his own endzone and threw the ball into the waiting arms of linebacker Richard Wood who ran it ten yards for a quick score. After missing the extra point the Bucs held a 26-0 advantage. This was their day. The Saints finally got on the board with Manning back under center, he engineered a 4 play 66 yard touchdown drive that ended with him keeping it himself as he ran it in on a bootleg from two yards out. After the Bucs went three and out they pinned the Saints deep, moments later Wood deflected a pass that was snatched up by defensive end Greg Johnson who walked straight into the endzone. With Buccaneers up 33-7 and less than two minutes to play the Tampa sideline began to celebrate the victory that had been so damn elusive. They had to watch Manning pick up a garbage time touchdown before the true celebration began. It was a celebration that continued after their plane landed in Tampa as they were greeted by more than 8,000 fans that were accompanied by the team band as well as their cheerleaders. The crowd was so large that they had to close a street outside of the airport and the team shuffled in and out so quickly that a cavalcade followed the team buses to their headquarters where they cheered them on as the coach and the team owner addressed the crowd. Each of those faces in the crowd along with the coach and all the players who had endured losing and could finally go to sleep at night a winner. The next Sunday the Bucs capped the season off with a 17-7 win over the St. Louis Cardinals and the fans tore down the goalposts. Sounds like one helluva week in Tampa.

Check out the box score: http://www.pro-football-reference.com/boxscores/197712110nor.htm

Posted by Wade Forrester at 3:06 AM