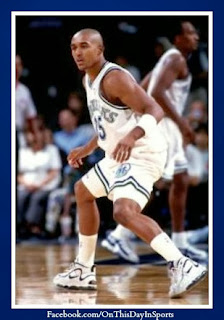 On December 29, 1997, Dallas Mavericks forward rookie Bubba Wells broke a record that had stood  for 41 years when he fouled out in three minutes in a game against the Bulls in Chicago. The tactic came from the mind of Wells' coach Don Nelson who was hoping to limit the Bulls scoring attack. Nelson had Wells set his sights on Dennis Rodman who was known to have a weakness from the line, it was a strategy that failed as Rodman hit on 9 out of 12 from the line and the Bulls would go onto win 111-105. He would have probably been better off leaving the ball in Rodman's hands on the floor as he went 1 for 7 from the field. Although, he would have probably just dished to off to one of his teammates like Michael Jordan who scored 41 on points on the night. Rodman finished the night with 11 points, 27 rebounds, and 8 assists. While it took three minutes to foul out for Wells, in actuality it took nearly 10 minutes but it was three minutes of clock time. The record had been set by Dick Farley of the Syracuse Nationals in 1956 when he fouled out in five minutes in a game against the St. Louis Hawks. The strategy by Nelson was a whatever it takes kind of thing, he had taken over a sinking ship and had employed a variety of strategies as he attempted to lead his team to victories. he would eventually turn that sinking ship into a true contender. The strategy that was used on that night in Chicago would become known as the "Hack-a-Shaq" defense as it became a common practice against Shaquille O'Neal since he struggled from the line. The career of Bubba Wells was a short one, in fact he spent just one year with the Mavs then was traded to the Suns. After the trade he never stepped on the court at the NBA level again. He has since moved on to coaching at the collegiate level. While the run in the NBA might have been short, he made his mark and it took just three minutes off the clock to do so.

You can watch it here: https://www.youtube.com/watch?v=VjTGfa6FY6A
Posted by Wade Forrester at 3:14 AM