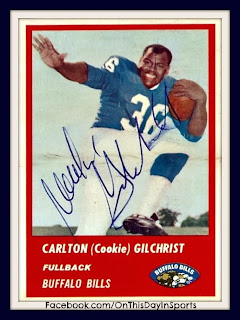 On December 8, 1963, in front of more than 20,000 at Buffalo's War memorial Stadium fullback Cookie Gilchrist had the finest rushing day in the history of the AFL when he rumbled for 243 yards and scored 5 touchdowns in 45-14 romp over the New York Jets. The 250 pound battering ram made life hell for the Jets defenders that day, he began his scoring with a four yard touchdown run in the first then punched in the second with a goal line blast in the second. Along with Gilchrist's solid running a field goal by Mack Yoho and a 23 yard touchdown pass by Daryle Lamonica gave the Bills a 24-7 advantage at the half. The best was yet to come for Cookie as Lamonica kept handing the ball to him and he kept running through the Jets defenders. In the third quarter he smashed through from the one once again giving the Bills a 31-7 lead then followed it up with two more touchdowns in the fourth before the Jets answered back with a late score that hardly put a dent in the scoreboard. His first fourth quarter touchdown was his longest scoring play of the day as he took it in from 19 yards out, the second was a 6 yard run. The 243 yards on the ground bested Houston's Billy Cannon record of 216  rushing yards in a game against New York in 1961.  The 5 touchdowns tied a record  that was held by the aforementioned Cannon, as well as Dallas' Abner Gaines.

Gilchrist began his professional football career north of the border, first as a member of the Ontario Rugby Union, then moved onto the CFL where he became a dominant force. In '57 he helped lead the Hamilton Tiger-Cats to a Championship then spent several more seasons with in Canada playing for two other teams. He joined the Bills in '62. The original plan was for the Bills was to have Heisman winner Ernie Davis in the backfield with Gilchrist a backup option, that was if they could keep him from going to the NFL. Fate changed that plan as Davis never played a down of professional football. He was diagnosed with leukemia and died at the young age of 23. Many of you I'm sure have watched "The Express" which is a great biopic of the Ernie Davis story. The plan for the Bills might have been altered but Gilchrist proved to be a formidable option, in fact he was a star. He was the first running back to top the 1,000 yard mark in his rookie season then he continued to wreak havoc on the opposing teams defenses as he bowled them over. Regularly recognized as one of the best Gilchrist but is often overshadowed by premier backs O.J. Simpson and Jim Brown. Mainly because his career was much shorter and a little less storied than both of those men. With that said, he helped the Bills win the AFL Championship in '64 and I'm sure that when the opposition looked over and saw him lining up on the other side they knew he was a force to be reckoned with. Two out of three seasons in Buffalo he led the league in rushing. After the championship season a contract dispute ended his tenure in Buffalo. It led to a year in Denver in which he finished second in rushing yards before moving onto Miami for a season then back to Denver where he hung up the cleats after participating in one game during the '67 season. While the career of Cookie Gilchrist might not be as storied as some of the others that came along it is still quite the story nonetheless. I wish I could have watched him rumble.