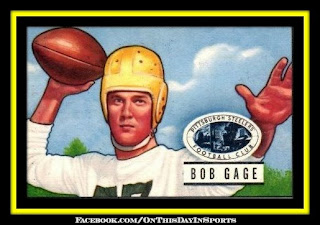 On December 4, 1949, with the Steelers down 30-7 to the Bears in Chicago, Pittsburgh back Bobby Gage tied an NFL record with a 97 yard dash that closed the gap to 30-14. Just 44 seconds later the Steelers capitalized on a fumble that had Gage running it in from 6 yards out to bring it to 30-21. The Steelers looked like they might have a shot at pulling off the unbelievable comeback after an interception put the ball right back in the hands of their offense only to have a fumble squash their hopes. The 97 yard run by Gage with 2:39 left was what gave the game historical significance It tied Green Bay's Andy Uram's 97 yard rumble that he had set in a 27-20 win over the Chicago Cardinals in 1939. The run by Gage surprised George Halas' squad as he looked like he was getting ready to punt, stepped deep into the endzone, then broke right and was off to the races up the sideline. The record stood until 1983 when Tony Dorsett of the Dallas Cowboys took it to the house from 99 yards out on Monday Night Football. While Gage only played two seasons in the NFL he stills holds the Steelers franchise record for longest yards from scrimmage. He was a multi talented athlete who not only played tailback, he also played the quarterback position, as well as defensive back.