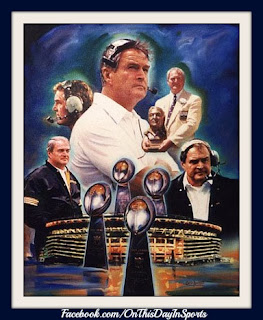 On December 26, 1991, the end of an era happened in Pittsburgh when the head coach of the Steelers Chuck Noll announced that he would be retiring after 23 years at the helm. When Noll took over as the 14th head coach in the Steel City in 1969 he had his work cut out for him. Before Noll arrived the Steelers had only enjoyed 8 winning seasons in 36 years of existence and the hope Noll could turn them into a legitimate contender. It took three seasons of losing for Noll to turnaround the team that was considered a laughingstock of the NFL. One of the keys to Noll's success was adding players through the draft that would end up forming one of the greatest dynasties in the history of the NFL. His first pick was linebacker "Mean Joe" Greene, the future Hall of Famer would become a centerpiece to a defense that became known as "The Steel Curtain," one of the most feared defensive units in the game. It took time though, his tenure began with a dismal 1-13 campaign, as Noll continued to draft well, bringing in players like Terry Bradshaw and Franco Harris the ascent out of the cellar began. They posted an 11-3 record in '72 beginning a run of eight consecutive playoff appearances. The team that was once the laughingstock of the NFL had become a legitimate contender. The draft in 1974 was was the lynchpin in the Steelers becoming a dynasty. They selected four future Hall of Famers in their first five picks. Those men who would end up in Canton were wideouts Lynn Swann and John Stallworth, as well as linebacker Jack Lambert and center Mike Webster. To date, no team in the history of the game has had a draft that included more than two future Hall of Famers. It paid immediate dividends as the Steelers posted a 10-3 record and would go onto win the first Super Bowl Championship in franchise history. One year later the Steelers were champions once again as they dominated the '75 season with a 12-2 record. After a couple of years of falling short of the ultimate goal the Steelers returned to glory in '78 as they posted a 14-2 record and went onto to win the Super Bowl for the third time in five years. The '79 season saw Noll top off his decade of dominance with a 12-4 record and his fourth Lombardi Trophy. The next decade did not match the one before, after back-to-back playoff appearances in '83 and '84 poor drafts and personnel decisions led to a decline in the organization. The team only made more playoff appearance in '89 but fell one pint short of going to the AFC Title game. Noll's decision to retire came after a 7-9 season in '91 as he realized the time had come. Even with the 80's being a bit disappointing by most standards, it could not take away from the 4 time championship decade of the 70's. He would forever be a legend in Pittsburgh and beyond as the only head coach to guide a team to four Super Bowl titles. Generations to come will know the name Chuck Noll and it will be held in such high regard as Curly Lambeau, George Halas, and Vince Lombardi as he stands alongside them at the Hall of Fame in Canton, Ohio.

Posted by Wade Forrester at 2:52 AM