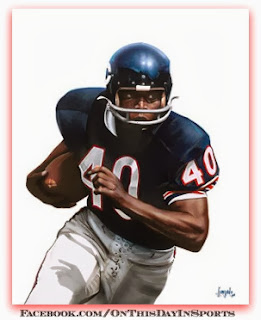 On December 12, 1965, Bears rookie Gale Sayers turned in one of the greatest performances in the history of the NFL as he scored a record tying 6 touchdowns in a 61-20 beatdown of the San Francisco 49ers at a muddy Wrigley Field in Chicago. The Bears had opened that '65 season against those same Niners and ended up losing 52-24 which was a little fuel for the fire.The Gale Sayers show started with the running back hauling in a Rudy Bukavich bomb that turned into an 80 yard touchdown. It was just a glimpse at how the day was gonna go for Sayers and his Chicago Bears. In the second quarter he scored on touchdown runs from 21 and 7 yards out, then in the third he scored another pair from 50 and a 1 yard out to bring his total to 5 on the day. Sayers put the exclamation point on things with an 85 yard punt return in the fourth. His six touchdown performance tied the record that had been set by the Chicago Cardinals' Ernie Nevers in 1929 and equaled by Dub Jones in 1951 when he was running the rock for the Cleveland Browns. Both of those six touchdown days came against the Bears but on this day in Chicago Sayers turned the table. The 46,278 that sat in the stands witnessed something that no man has been able to equal since. The '65 season was something special for Sayers, he established a new rookie record with 22 touchdowns scored and that is another feat that has not been accomplished since. With a 9-5 record the Bears ended up finishing third in the Western Division which was a great improvement over the year before when they flipped the record around and sat at 5- 9. A great deal of the improvement could be attributed to the emergence of Sayers and another rookie by the name of Dick Butkus.

If you have 9 minutes to spare this is an absolute great video that talks about both Butkus and Sayers: https://www.youtube.com/watch?v=pk35vPHDtAQ
Posted by Wade Forrester at 3:26 AM