December 3, 1950: Tom Fears Hauls In 18 As The Rams Annihilate The Packers 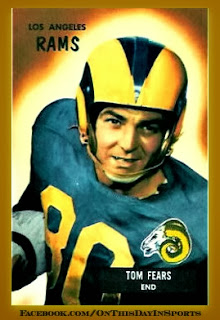 On December 3, 1950, in the final game of the regular season Rams wideout Tom Fears hauled in a record setting 18 passes in a 51-14 beatdown of the Green Bay Packers in front of 39,323 cheering fans at the Coliseum in Los Angeles. Before the game even began the news came across the wire that the Cardinals had beaten the Bears in the Battle of Chicago, a Rams win guaranteed a crack at the conference title which was a goal they would achieve in dominant fashion. The Rams were held scoreless in the first quarter, then early in the second Green Bay's running back Floyd Reid set up the first points of the game with a 57 yard rumble that put the Pack at the eight yard line. One pass later Bob Mann hauled in a Paul Christman pass and the Rams were in a hole. They would get out of that hole quickly as they began to dominate on both sides of the ball. In fact, the Packers weren't able to get back on the board until late in the fourth quarter. While they were busy not scoring, the Rams were lighting up the scoreboard like a Christmas tree as they scored 5 touchdowns and safety before the Pack answered back in the fourth. After they answered back the Rams tacked on two more touchdowns for good measure. While it looks like Fears might have been a bit of a one man show as he set the new record for receptions, the entire Rams offense put on a show. Before the day was over quarterback Norm Van Brocklin added three touchdown passes to his resume with Fears hauling in the third. Bob Waterfield took over under center late in the third and threw his first touchdown pass of the game to Vitamin Smith before sitting on his sideline. The Packers marched 84 yards, capping off the drive with a short touchdown pass from Tobin Rote to Ted Cook that hardly put a dent in the scoreboard. At that point the Rams held a 37-14 advantage, the joys of scoring didn't last long for the team from Wisconsin. Fears hauled in his second touchdown pass of the day, a four-yarder from Waterfield. Fear finished the day 189 receiving yards with the two touchdowns along with the 18 grabs.Then the final blow to the Green Bay D came with a late touchdown run that capped off the 51 point day for the Rams. The record setting day by Fears also capped off a record setting season for the future Hall of Famer. He finished the season with record 84 pass receptions and he led the league with 1,116 receiving yards. The huge win led to a divisional playoff between the Bears and the Rams in L.A. to decide who would go onto the NFL Championship game. After beating the Bears 24-14 in that playoff game the Rams fell to the Cleveland Browns 30-28 in a classic Christmas Eve Championship game. Fears' record stood until 49ers wideout Terrell Owens caught 20 balls in a 17-0 win over the Chicago Bears in 2000, nine years later Brandon Marshall of the Denver Broncos hauled in 21 against the Colts but they still managed to lose 28-16. To date, Fears' 18 catch day is good for third place on the all-time list. You can view that list here: http://www.pro-football-reference.com/leaders/rec_single_game.htm