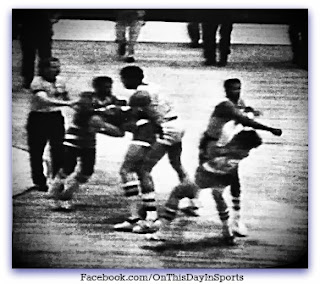 On December 9, 1977, one of the uglier incidents in NBA history took place at the Forum in Los Angeles when an on court skirmish ended with the lakers Kermit Washington hitting Houston's Rudy Tomjanovich in the jaw so hard that it nearly killed him. It  happened during the third quarter as Tomjanovich was attempting to play the peacemaker after Washington and Tomjanovich's teammates Kareem Abdul-Jabbar and Kevin Kunnert got into a fight. As Kunnert was being knocked to the floor Tomjanovich came running over and Washington came around with what was described as a roundhouse punch that broke Tomjanovich's jaw, nose, gave him a serious concussion, fractured his skull, and left him in a pool of blood. The doctor that had to operate on him said that he had seen people with lesser injuries not survive and compared the surgery to putting an egg shell together with scotch tape. The incident was followed with a 60 day suspension for Washington as well as a $10,000 fine. The repercussions for Tomjanovich were far more severe, he did make a full recovery but was never the same, and just a few seasons after the infamous moment he retired from the sport. Later in life Tomjanovich had a successful coaching career and guided the Houston Rockets to back-to-back titles in '94 and '95. The intentions of Kermit Washington were not to seriously injure an opposing player. It was a heat of the moment reaction that had great consequence. Washington received hate mail, death threats, and his family had to pay a price for that one heated moment as well. Two weeks after the incident the Lakers traded Washington to the Boston Celtics. After a short lived stay in beantown he played a season with the San Diego Clippers before going to Portland where he spent his last three seasons. I'm sure the incident haunted all those involved. It led to lawsuits, settlements, and the end of a promising career. Both men would acknowledge that it is something that they have had carry with them but they also acknowledged it is something they put to bed. In fact, they are friends today. A lesson that can be learned out of this is even in the heat of the moment you must think before you act. One decision can effect the rest of your life and the lives of others. It is very fortunate that this story didn't end in tragedy and that the two men have become friends. It's just too bad it doesn't always work like that.

If you go to the 1 minute and 50 second mark in the video you can watch the incident: https://www.youtube.com/watch?v=jgqUZ1IAA_8
Posted by Wade Forrester at 2:30 AM