December 25, 1971: Dolphins/Chiefs and The Longest Game In The History Of The NFL 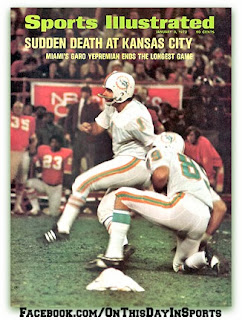 On December 25, 1971,  in an AFC divisional playoff, Garo Yepremian's 37 yard field goal 7 minutes and 40 seconds in the second overtime capped off a 27-24 win for the Dolphins over the Chiefs in Kansas City. Yepremian's kick not only moved his squad onto the next round, it also put the exclamation point on the longest game in the history of the NFL that had lasted a grand total of 82 minutes and 40 seconds before a victor was declared. Three times the Dolphins fought their way back from deficits and the final score showed the only time they had led in the contest. The Chiefs put up ten points in the first on a 24 yard field goal off the foot of Jan Stenerud then Len Dawson turned a turnover into 7 more points by hooking up with Ed Podolak on a 7 yard touchdown pass. The seesaw shifted in the second quarter, Bob Griese led the Dolphins right back into contention as he led the team down the field through the air, before handing off to Larry Csonka, who punched it in from the 1. With the clock winding down in the first half, Podolak fumbled and the Dolphins D came up with it leading to a game tying field goal by Yepremian. The two teams would head to the locker room tied and when they both returned to the field it is safe to say they were ready to play some ball. The second half began with a 14 play 74 yard drive that the Chiefs Jim Otis slammed in from the 1. The drive took 9 minutes and 44 seconds and put the Chiefs up 17-10. The lead didn't last long, Griese took control and marched it down the field in 8 plays with Jim Kiick finishing things off with a one yard run of his own. After exchanging hands via the turnover, Dawson and the Chiefs stormed 91 yards which included a 63 yard bomb to rookie Elmo Wright from Len Dawson which was one of the most spectacular plays of the day. Podalak finished it off with a three yard run and the Chiefs were up once again. The Dolphins simply refused to quit. Griese took his team 71 yards, hooking up with Paul Warfield on passes of 17 and 26 yards before hitting his tight end Marv Fleming on a 5 yard game tying touchdown with 1:25 left on the clock. The sure footed Stenerud had a chance to win it in regulation but missed the 31 yarder and the two teams were headed for sudden death. The fifth quarter was a defensive battle that saw a Stenerud field goal blocked while his counterpart Yepremian fell short on a 52 yard attempt. The game winning field goal was set up by a 29 yard run by Csonka that put the ball on the Kansas City 36, three plays and 5 yards later Yepremian came in with the season on the line and split the uprights. The Dolphins rushed the field in rejoice while the Chiefs stood there exhausted and defeated as they watched the celebration. It was truly one of the greatest battles in the history of the NFL as both teams left it all on the field, but only one could emerge victorious.

There were 11 future Hall of Famers on the field that day in Kansas City, of those 11 men one man stood above the rest and that was the Chiefs Ed Podalak. He alone had 350 all purposes yards. 85 rushing, 110 receiving, and 155 in return yards but still ended up on the losing end in the instant classic.

If you look at the box score and think of it in the terms of a boxing match you would say Round 1 was all Chiefs and Round 2 was all Dolphins, the other rounds were virtual draws until Yepremian delivered the knockout blow.

Merry Christmas to all

Posted by Wade Forrester at 4:31 AM