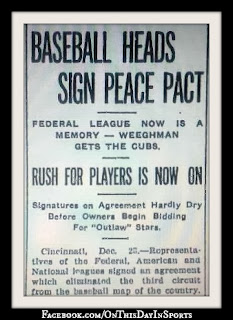 On December 22, 1915, it was announced that a peace treaty had been signed between the Federal League and the Major League Baseball essentially ending a war that had begun a couple of years before when the "outlaw league" had formed. The agreement would mean that the league would disband and that the owner of the Chicago Whales Charles Weeghman would be purchasing the Cubs while the owner of the St. Louis Terriers Phil Ball would be able to purchase the Browns and players that had been blacklisted from the ranks of Major League Baseball would be removed from that list. Before the Federal League formed there was a large variety of organized leagues in baseball but none had ever reached the point that they would be considered a "major" league. That all changed when the Federal League came along in 1914. With John T. Powers leading the way as league president the six team league came together, with the Terrapins in Baltimore, the Tip-Tops in Brooklyn, the Blues in Buffalo, the Rebels in Pittsburgh, the Hoosiers in Indianapolis, the Packers in Covington, Kentucky, and the aforementioned Terriers and Whales. Out of those teams the Hoosiers and the Packers would end up moving out f their respective cities, with the Hoosiers going to Newark, New Jersey where they were known as the Pepper and the Packers ended up in Kansas City. Unlike any of the other leagues that had formed before it the Federal League had big money behind it and began to lure players away from both the American and National League's. Many of the men lured away were not of star caliber, but there were a variety of names that made the league legitimate such as Joe Tinker, Chief Bender, "Three Finger" Brown, and more. All in all 172 of the 286 men who played in the Federal League had played in the American or National League. While the agreement stated that blackballed players would be able to go back many of them never stepped on the diamond as a major leaguer again. In fact out of those 172 only 71 returned to the ranks of major league baseball and the bigger names were snatched off the market quickly. While the league was short lived it proved to have one of the most exciting seasons in the history of professional baseball in 1915, when the Whales and Terriers played in the tightest pennant race in the history of the game. The Terriers finished with a 87-67 record while the Whales went 86-66 finishing one tenth of a percentage point ahead of the club from St. Louis. The "War" that was waged against the professional baseball had a ripple effect of sorts, it drove salaries up, caused scheduling conflicts ,and had a great financial strain on all the "major" leagues in operation. That brought the parties involved in the Federal League to the bargaining table where the agreement was hammered out. It entailed $600,000 that would be distributed among team owners as well as the agreements on Weeghman's and Ball's plan to purchase the Cubs and Browns. Both Weeghman and Ball would bring many of the palyers fromt heir Federal league rosters over to their new clubs following the disbandment. Weeghman owned a ballpark that we all know as Wrigley Field today and he would shift the Cubbies from Chicago's west side to the north side where they have resided since 1916. Many might not know it, but Wrigley was built for the Federal League, it was called Weeghman Park and today it is the only remaining ballpark that was used for any of those teams that played in the league. While it came and went, the Federal League changed the baseball landscape. One team out of the six challenged the settlement reached which was the Baltimore Terrapins, they would take an anti trust suit all the way to the Supreme Court, it was a battle that would not be won as the court stood on the side of Major League Baseball and after the case was dismissed most remnants of the Federal League had become a thing of the past. The old ballpark that stands in Chicago is one of the only things truly left that is a reminder of a league that once was.

This is an in depth article that was published by the Society of American Baseball Research:  http://research.sabr.org/journals/federal-league-a-major-league It is a very good read if you have interest in the Federal League. This is just one of the articles about the league that they have published.
Posted by Wade Forrester at 4:51 AM