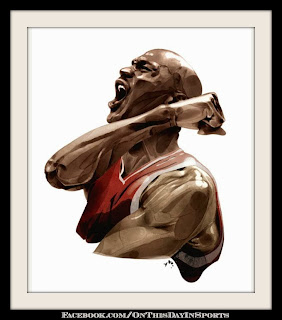 On November 30, 1996, in a 97-88 win over the Spurs in San Antonio, Chicago Bull legend Michael Jordan became the tenth player in the history NBA to score 25,000 points in his career. The milestone for Jordan came on the last shot of the game and capped off a 35 point performance. He came into the game a man on a mission as he sat just 35 points away from the mark. He came out the gate a man on a mission, knocking down 15 points in the first quarter alone. By halftime he sat at 22, then he was held scoreless in the third quarter. Things started to drop for him in the fourth and with a 3 pointer with just 3 minutes and 10 seconds left in regulation he found himself two points away from joining the elite list. After missing four shots his teammates kept putting the ball in his hands and he finally dropped the milestone basket through the hoop. It took Jordan 782 games to reach the milestone, only Wilt Chamberlain accomplished the feat in less games. He reached the mark in his 691st game. Jordan finished his career with 32,292 points. His legendary career included 14 All Star appearances, 5 MVP awards, as well as 6 NBA Championship titles. The list of accomplishments by Jordan is too long to list which is one reason why he will always be considered one of the greatest to ever pick up a basketball.

The artwork was done for Nike by HelloVon studios out of London. Check out their Facebook page: https://www.facebook.com/pages/HelloVon/289118247784376